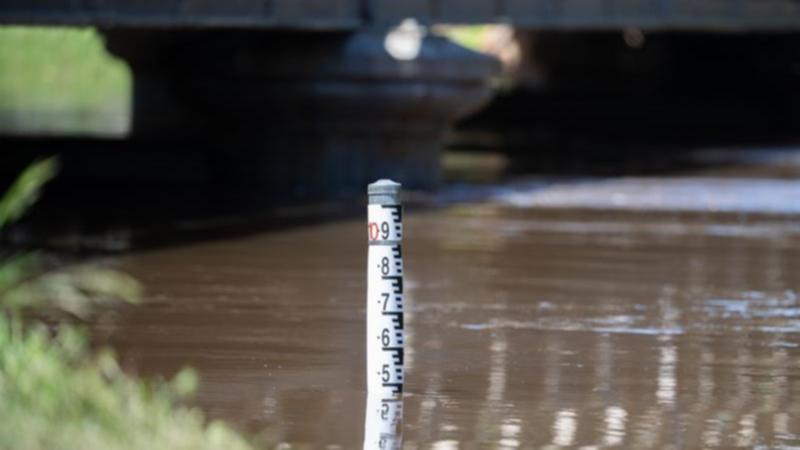 Swollen rivers continue to surge into towns across NSW, as the Bureau of Meteorology announces the soggy weather is likely to linger for the rest of the year.

Flood warnings are current for a suite of rivers across NSW, as the Australia weathers what looks set to be its wettest spring in a decade.

Major flooding is occurring along the Namoi River at Gunnedah, where the water was expected to have peaked overnight.

Further downstream, moderate flooding is likely at Narrabri and major flooding is possible at Wee Waa later this week.

The Gwyndir River has also swelled, with major flooding at Yarraman.

Goondiwindi is experiencing moderate flooding, but the Macintyre River is expected to peak around the major flood level on Wednesday.

Moderate flooding is still underway at Forbes on the Lachlan River, which was inundated over the weekend, and at Cottons Weir.

The main flood peak is currently passing Jemalong, where major flooding is occurring.

Major flooding is expected in Condobolin later this week, while Coonamble may experience moderate flooding.

The summer will likely remain just as damp, with meteorologists declaring Australia is now in a La Nina cycle – the cooler, wetter sister of the El Nino-Southern Oscillation pattern that typically brings increased temperatures and bushfire danger.

Instead there will be a greater risk of damaging tropical cyclones and flooding.

During the last significant La Nina between 2010 and 2012, widespread flooding inundated NSW, Victoria and Queensland, which was also hit with the Category 5 tropical cyclone Yasi.

However, the BoM does not expect this La Nina to be as bad.

Bureau of Meteorology head of operational climate services Andrew Watkins said this summer’s La Nina will probably be weaker than a moderate La Nina that developed last year, but the danger remains.

“A weak La Nina can still bring heavy rainfall at times. With a wet landscape we are at risk of more widespread flooding over the summer,” Dr Watkins says.

In the immediate future more rain is expected for the rest of the week in NSW, with renewed river rises possible.

The State Emergency Service has already responded to over 6715 calls for help since storm season began on October 1.