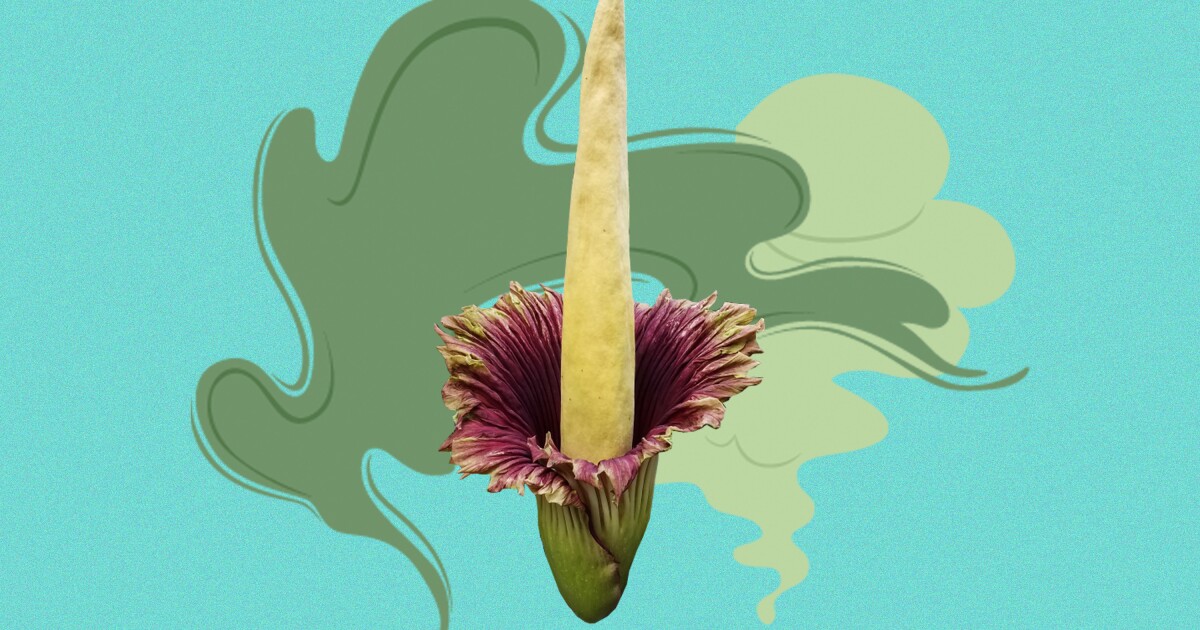 What do gym socks, a portable potty and a dead rat have in common?

They’re all words used to describe the putrid odor from a corpse flower in bloom, and if you’re going to be in Los Angeles this weekend, you may be lucky enough to catch a whiff yourself at the Huntington Library, Art Museum, and Botanical Gardens in San Marino.

One of the Huntington’s corpse flowers, Scentennial, is set to bloom in the next seven days, and despite its well-advertised stench, the garden staff expect that hundreds of visitors will line up to view it. (Also, if you’re in Northern California, there’s another Amorphophallus titanum about to bloom at San Francisco’s Conservatory of Flowers.)

“Kids love it — even adults love it,” said Brandon Tam, the Huntington’s botanical curator. “Ultimately, they all come in because they want to smell something really stinky.”

Scent aside, there are a number of other reasons people are attracted to the corpse flower. Here is everything you need to know about Scentennial before it blooms.

1. Scentennial is more than 20 years old.

“It’s blooming for the second time,” Tam said. “The first time it bloomed for us was in 2019, which was our centennial celebration. That’s how it got the name Scentennial.”

Scentennial is currently more than 68 inches tall, and it’s getting taller. It is not unusual for the plant to grow seven inches overnight. The last corpse flower that bloomed at the Huntington peaked at 98.5 inches tall. That’s more than a foot taller than former basketball star Shaquille O’Neal.

It’s heavy too. “It takes a team of five people to transport a corpse flower from the greenhouse where it’s typically kept to a designated exhibit area,” Tam said.

The corpse flower needs to be in a warm and humid environment that mimics its native Indonesian habitat. It also needs the proper potting structure to sustain its weight and enough space for it to grow to its extraordinary height.

According to Tam, every botanical garden has a slightly different method of caring for its corpse flowers.

“We share knowledge between other gardens to become more efficient,” he said.

4. Yes, it really does smell that bad.

In the corpse flower’s natural habitat, its odor helps attract insects that mistake it for an animal carcass, which helps the plant pollinate and survive. The plant will smell only when it is blooming, which happens for about 24 hours.

“As soon as everyone walks in, they start to cover up their nose,” Tam said. “We’ve had people who have walked in and immediately walked out.”

Over the years, Tam has learned to tolerate the plant’s odor, but the smell will still catch him off-guard sometimes, he said.

The odor is strongest in the morning and fades throughout the day. Therefore, if you have an especially sensitive nose, Tam recommends you plan your visit for the afternoon.

5. Yes, there is a way to see the plant without smelling it.

On the Huntington’s website, you can find a 24-hour livestream of the plant in all its glory. In addition to watching the flower bloom, you’ll be able to see the hilarious reactions of visitors experiencing the scent for the first time.

6. The Huntington staff gets just as excited about the event as visitors do.

“I’ve seen a total of 18 bloomings since I’ve been here, and every single time it just blows me away,” Tam said.

Tam and his colleagues have been growing Scentennial for 20 years, and seeing visitors from all walks of life enjoy the plant reminds them that their hard work has paid off.

“Every time we see people walk into the conservatory, they have this big smile,” Tam said. “Their eyes are wide open. They are enthusiastic. They just love being around it. And so we can really feel the impact that we’re having and see the way we’re educating the public.”

Tam knows that the corpse flower might be a bizarre plant, but he also recognizes it as a gateway for people to enter the plant world.

“It’s certainly our mission at the Huntington to reach those who want to learn more about the lives of plants,” he said. “Our goal is to inspire the next generation of botanists and horticulturists.”

Want to be inspired? Here’s how to see the corpse flower.

📍: The Huntington Library, Art Museum, and Botanical Gardens
☎️: (626) 405-2100
🔗: huntington.org
📸: @thehuntingtonlibrary
⏰: In-person viewing is available during public hours (10 a.m. to 5 p.m., closed Tuesdays) in the Conservatory. Reservations are not required to visit weekdays, but capacity in the Conservatory will be limited to 20 to 25 people at a time. Reservations are required for weekends, free days and Monday holidays.
Nighttime viewing may be available depending on when the flower opens. Watch the Huntington’s website and social media accounts for updates. Select galleries in the Huntington Art Gallery are closed, as well as the Rose Garden Tea Room, the Ranch Garden and the Mausoleum.
Masks are optional outdoors and strongly recommended indoors but not required.
💰: $13 to $29; children 3 and younger free. There is free parking on the property.