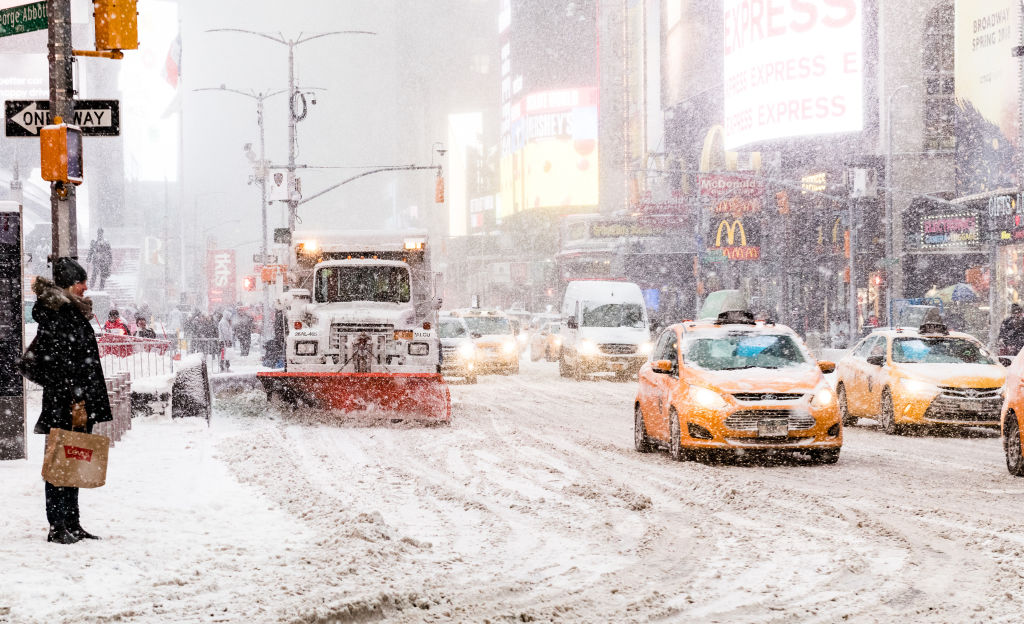 A powerful winter storm has already grounded thousands of flights as it threatens to bring heavy snow to New York and Boston while raking the Atlantic coast with blizzard conditions.

New York City is expected to get 6 to 10 inches (15 to 25 centimeters) of snow, while Long Island may have as much as 18 inches, according to the National Weather Service. Boston could see two feet of accumulation.

Snow will start in earnest in New York around 7 p.m. Friday and 1 a.m. in Boston, where Mayor Michelle Wu declared a snow emergency and opened 24-hour shelters. Eastern Massachusetts including Cape Cod may end up with 2 feet, the weather service said.
[time-brightcove not-tgx=”true”]

New York State will be under a state of emergency beginning at 8 p.m., and Governor Kathy Hochul has told residents to stay home if possible. Public transportation could be affected, notably New York City’s Metropolitan Transportation Authority and outdoor parts of the subway.

New York City will also get buffeted by gusting winds of as much as 35 miles (56 kilometers) per hour starting Saturday and rising to 50 mph as the storm pulls away, said James Tomasini, a weather service meteorologist in Upton, New York. With temperatures expected to plummet to about 12 degrees Fahrenheit (-11 degrees Celsius) late Saturday, the wind will make it feel closer to -5 degrees or colder.

“For the city, we’re expecting near blizzard conditions,” Tomasini said.

“If you have to go out, you will be able to drive in New York City—I strongly recommend you don’t,” Edward Grayson, commissioner of the city’s sanitation department, said at a press conference.

Blizzard warnings stretch from Virginia to Maine, including the Delmarva Peninsula and Boston. This is Boston’s first blizzard warning since March 2018, said Rob Carolan, owner of Hometown Forecast Services. Widespread power outages are possible, with wind gusts near hurricane-strength of 74 mph.

“We are very easily going to gust over hurricane force on Cape Cod,” Carolan said. “It definitely looks like it is going to be a doozie.”

Snow will fall so fast and winds will blow so hard along New England’s coast that plows won’t be able to keep up, he said.

The nor’easter will rapidly intensify as it comes northeast with its central pressure dropping at least 24 millibars in 24 hours, a process called bombogenesis that forecasters dub “bomb cyclone.”

More than 4,750 flights have been canceled around the U.S. from Friday through Sunday, with the majority out of Boston, New York, Newark, New Jersey and Washington, according to FlightAware, an airline tracking service. Delta Air Lines Inc. canceled 1,290 flights through Sunday due to the severity of snow and winds in the region, the airline said in a Friday statement.

New Jersey is declaring a state of emergency starting at 5 p.m. in preparation for what Governor Phil Murphy is calling “a significant statewide snow event.”

“Our advice to everyone is to be prepared to hunker down once you get home this afternoon and stay home,” Murphy said in a Friday briefing. “Stay home tonight and stay home tomorrow.”

Winter storm warnings extend into Canada’s Maritime provinces of Nova Scotia, New Brunswick, and Prince Edward Island, as well as parts of Newfoundland and Labrador, according to Environment and Climate Change Canada. As much as 40 centimeters of snow could fall in Halifax, with winds gusting to 100 kilometers per hour through Sunday.

PJM Interconnection, the largest U.S. grid operator, told generators to ensure they have sufficient fuel supplies and asked them and transmission companies to cancel maintenance plans across the southern and Mid-Atlantic region. ISO New England, the six-state grid that serves 14.8 million people from Connecticut to Maine, issued an alert at 3 p.m. that abnormal conditions exist or are anticipated for the network.

Electricity prices are climbing as the storm approaches. New England spot power jumped 35% to an average $234 per megawatt-hour as of 3:20 p.m., while New York City rose 30% to average $227 after briefly topping $600. Earlier, prices in Maryland and Delaware soared to more than $1,500, according to PJM.

Temperatures will stay below freezing across much of the Northeast until at least Tuesday, meaning not a lot of snow will melt for a few days, U.S. Weather Prediction Center’s Marc Chenard said.