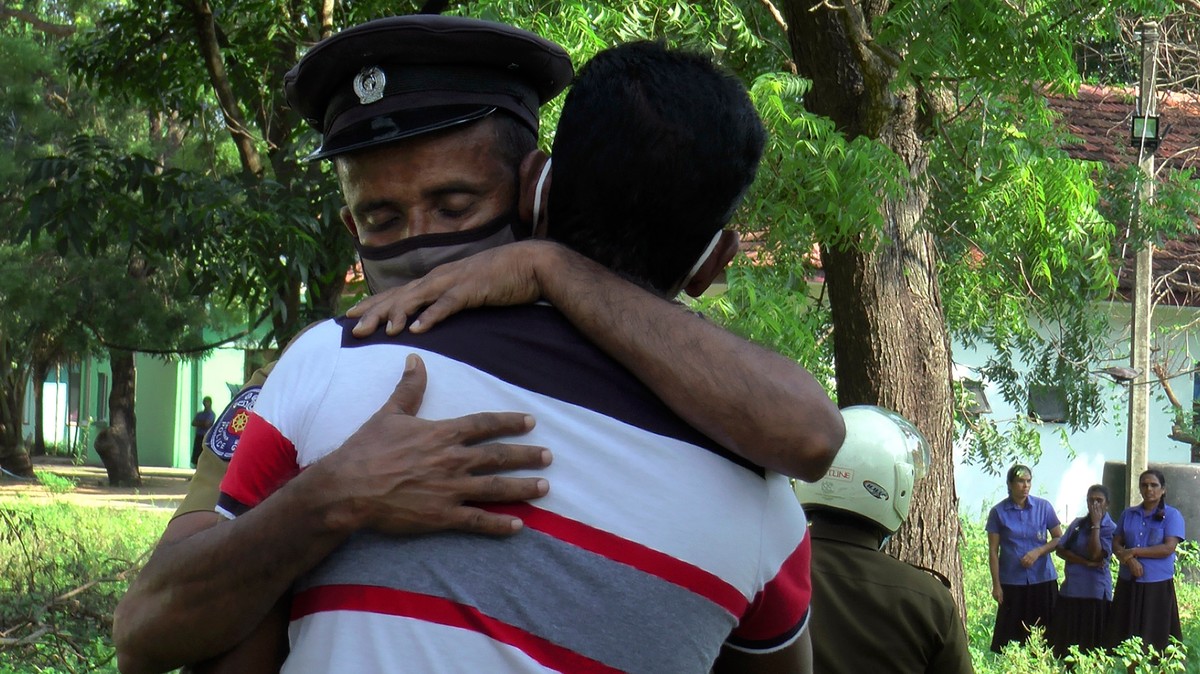 A  police officer hugs to console a relative of a victim at a police station in Thirukkovil, Sri Lanka, Saturday, Dec. 25, 2021. Photo: ASSOCIATED PRESS/Achala Pussalla

For reasons still unclear to investigators, a police sergeant opened fire at his police station, killing four and injuring another three of his coworkers in the eastern Sri Lankan town of Thirukkovil.

At 10:30 p.m. on Christmas Eve, the accused, Vinesh Kumar, grabbed the service firearm of a fellow police officer and began firing at his coworkers. Kumar then proceeded outside the police station building and fired at a police vehicle carrying the officer-in-charge, who had just returned from his rounds.

A police sergeant, two police constables and a constable driver were killed in the shooting. Three officers, including the officer-in-charge, survived the attack and were later shifted to local hospitals.

According to a police statement, Kumar briefly went home after the shooting, carrying two T-56 assault rifles and rounds of ammunition. He then surrendered himself with the weapons at a separate police station, where he was taken into custody.

The incident has triggered shockwaves in the town of Thirukkovil, a former conflict zone that has remained largely peaceful since the resolution of the 26-year Sri Lankan civil war that ended in 2009.

Police are currently investigating Kumar’s motives for the shooting. They denied media reports that said it was in retaliation for having been denied a request for a leave of absence.

“He didn’t ask for a leave from the officer-in-charge, and he did not file an application for a leave. In the month of November, he even took a seven-day leave,” police spokesperson Nihal Thalduwa told VICE World News.

The incident has raised the issue of mental health among the country’s law enforcers. Depression, burnout, anxiety and post-traumatic stress disorder have been reported among police forces in Sri Lanka and around the world.

The distrust from their communities and a compromised reputation, owing to reports of brutality, extrajudicial killings, corruption and ethnic discrimination, are taking a toll on the mental health of Sri Lankan police officers, according to observers. A 2016 study showed that larger factors such as the rigors of maintaining post-crisis law and order while living with the traumas from the separatist war almost a decade ago and natural disasters like the 2004 tsunami that claimed 30,000 lives have also left Sri Lankan law enforcers vulnerable to mental health challenges.

However, the investigation has yet to establish whether mental health was a factor behind the Christmas Eve shooting incident.

“So far there has been no history of depression in the accused. However, it should be noted that the investigation is still currently underway, and we cannot give a conclusive statement until it is finished,” said Thalduwa. “It is an isolated incident and seems to have been a personal matter. We haven’t encountered a similar situation like this.”

The injured officers are currently recuperating at three different hospitals, while those killed have been granted posthumous rank promotions.

Kris Thomas contributed to the reporting of the story.