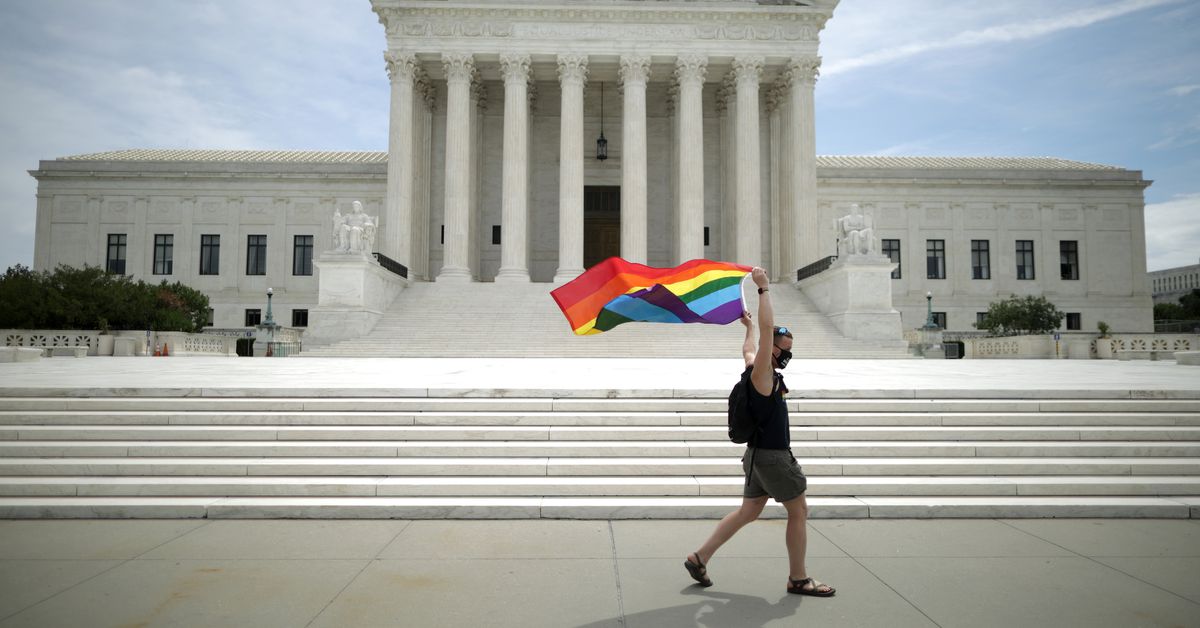 At first glance, the Supreme Court’s decision in Marietta Memorial Hospital v. DaVita has little to do with LGBTQ rights, or with traditional forms of discrimination more broadly. The Court’s 7-2 decision in Marietta narrowly reads a federal law intended to limit Medicare expenses, shifting certain costs from private health plans to the federal government in the process.

But, as Justice Elena Kagan explains in a persuasive dissenting opinion, Marietta could have ominous implications for victims of anti-LGBTQ discrimination, as well as for some victims of religious and other forms of discrimination. Read broadly, the Marietta decision could provide both government entities and private businesses with a workaround they can use to avoid triggering anti-discrimination laws — even as they engage in unlawful discrimination.

Medicare is ordinarily thought of as a single-payer health plan for older adults, but it also extends coverage to hundreds of thousands of Americans with end-stage renal disease — an expensive condition that requires patients to either undergo dialysis or receive a kidney transplant in order to continue living.

Some patients with this disease, however, also have private health coverage through their employer-provided health plan or through some other private insurer. A federal law enacted in the early 1980s provides that, for these individuals, Medicare will only cover the costs of kidney dialysis that are not already covered by the private insurer.

Federal law also provides that a private health plan “may not differentiate in the benefits it provides between individuals having end stage renal disease and other individuals covered by such plan on the basis of the existence of end stage renal disease, the need for renal dialysis, or in any other manner.” The idea is to prevent private plans from offering such skimpy coverage of renal care that Medicare winds up picking up all the costs of dialysis.

Nevertheless, in Marietta, an employer-provided health plan provided “relatively limited reimbursement rates” to dialysis providers, in alleged violation of the law prohibiting private plans from discriminating against individuals with end-stage renal disease. Justice Brett Kavanaugh’s opinion for the Court reads the federal statute narrowly, holding that so long as a health plan provides “the same dialysis benefits regardless of whether an individual has end-stage renal disease,” it does not run afoul of federal law.

So if an insurer refuses to cover dialysis, it is effectively denying coverage to end-stage renal patients.

That brings us to why this decision could have severe implications for LGBTQ Americans. The Supreme Court has long held that laws that target “homosexual conduct” are themselves a form of anti-LGBTQ discrimination. That is, a state cannot get around laws prohibiting anti-LGBTQ discrimination by targeting sexual activity associated with same-sex attraction.

Just as needing dialysis is an “almost perfect proxy” for identifying people with end-stage renal disease, same-sex sexual activity is a strong proxy for identifying people who are gay or bisexual. Thus, if the logic of Marietta is applied to laws prohibiting LGBTQ discrimination — that is, if governments, employers, and other institutions that may wish to discriminate on the basis of sexual orientation are allowed to target activity that is closely associated with being gay or bisexual — those laws could become meaningless.

Kavanaugh’s reasoning in Marietta could have profound implications for LGBTQ rights.

But what happens if an organization discriminates based on an activity that is closely tied to race, gender, or some other protected trait? That depends on how closely tied that activity is to the trait. The Court has also given different answers to this question at different points in its history.

Much as Kavanaugh’s opinion in Marietta ruled that a health plan does not discriminate against people with renal failure so long as it affords the same dialysis benefits to all of its customers, Geduldig held that discriminating on the basis of pregnancy does not amount to discrimination against women.

“Absent a showing that distinctions involving pregnancy are mere pretexts designed to effect an invidious discrimination against the members of one sex or the other,” the Court reasoned in Geduldig, “lawmakers are constitutionally free to include or exclude pregnancy” in broader laws protecting workers with health conditions.

Kagan notes two such decisions in her Marietta dissent. One is the Court’s landmark LGBTQ rights decision in Lawrence v. Texas (2003), which struck down a Texas law prohibiting certain sex acts. Among other things, Lawrence explained that “when homosexual conduct is made criminal by the law of the State, that declaration in and of itself is an invitation to subject homosexual persons to discrimination both in the public and in the private spheres.”

In case Lawrence left any doubt about this point, the Court’s subsequent decision in Christian Legal Society v. Martinez (2010) made clear that laws that prohibit discrimination on the basis of sexual orientation also prohibit discrimination against people who engage in same-sex sexual activity. As Justice Ruth Bader Ginsburg wrote for her Court in Martinez, “our decisions have declined to distinguish between status and conduct in this context.”

Similarly, the Court recognized in Bray v. Alexandria Women’s Health Clinic (1993) that when an institution targets activities that are “engaged in exclusively or predominantly by a particular class of people,” then “an intent to disfavor that class can readily be presumed.” As Justice Antonin Scalia wrote in Bray, “a tax on wearing yarmulkes is a tax on Jews.”

This rule applies, moreover, even though there are some instances when non-Jews wear yarmulkes (or, for that matter, when straight people engage in sexual activity with people of the same sex). As Kagan writes in her Marietta dissent, “a tax on yarmulkes remains a tax on Jews, even if friends of other faiths might occasionally don one at a Bar Mitzvah.”

Admittedly, the Court’s previous opinions have not been precise about just how closely an activity must be associated with a protected trait before discrimination against people who engage in that activity becomes a form of unlawful discrimination. Although Bray recognized that a tax on yarmulkes would unlawfully discriminate against Jews, Bray also rejected the proposition that because “voluntary abortion is an activity engaged in only by women, to disfavor it is ipso facto to discriminate invidiously against women as a class.” (Scalia did not have particularly enlightened views about transgender or nonbinary individuals.)

Quoting from Geduldig, Scalia wrote in Bray that “while it is true … that only women can become pregnant, it does not follow that every legislative classification concerning pregnancy is a sex based classification” — including classifications concerning patients who want to terminate their pregnancies.

That is why Marietta is potentially a serious blow to LGBTQ rights, because it allows differential treatment on the basis of conduct (receiving dialysis) that is a nearly perfect proxy for a status (having end-stage renal disease) that is protected by law. This could undermine the Court’s holding in Lawrence and Martinez that anti-discrimination law makes no distinction between the “status” of being gay or bisexual, and the “conduct” of having sex with people of the same gender.