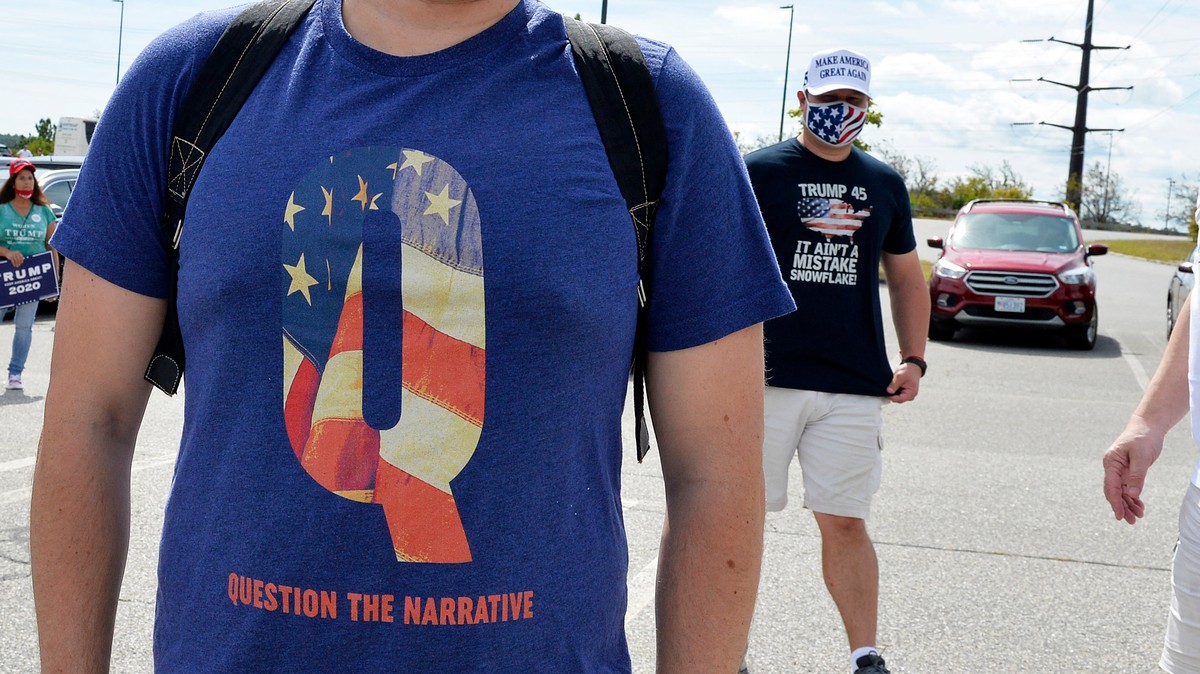 A man wears a QAnon shirt while boarding a shuttle bus at the Manchester Mall going to Manchester Airport in Londonderry, New Hampshire on August 28, 2020. (JOSEPH PREZIOSO/AFP via Getty Images)

Unraveling viral disinformation and explaining where it came from, the harm it’s causing, and what we should do about it.

Austin Steinbart has a lot going on. He claims to be a time traveler from the future. He claims he’s a deep-cover agent for the Defense Intelligence Agency. He claims he is Q. He claims QAnon is “a military intelligence operation” that uses “space-age quantum technology to post messages from the future to internet forums in the present.” His ideas are too out there for the vast majority of QAnon followers, who have dismissed him as a kook.

So, of course, when retired NFL star-turned-Republican congressional candidate Jerone Davison began looking for a campaign manager, Steinbart was a natural choice.

Or at least, a natural choice in a Republican Party still in thrall to former President Donald Trump, whose obsession with lies about a stolen election have brought QAnon conspiracies into the GOP’s mainstream.

Davison, a former running back for the Oakland Raiders, confirmed that Steinbart is indeed his campaign manager in social media posts this week, after media watchdog Media Matters first reported the appointment earlier this week.

“Austin is my campaign manager,” Davison, who is running in Arizona’s new 4th Congressional District, wrote on Facebook earlier this week, claiming that “the left is so afraid of my campaign that they tried to force me to fire [Steinbart].”

Davison was referring to reports linking him to QAnon as a result of his association with Steinbart—reports that are difficult to dismiss given Steinbart’s comments the previous week.

In a video posted on Steinbart’s Discord channel in early June announcing his role as campaign manager, the man who refers to himself as “Baby Q” told followers that he had created a campaign site for Davison to go “really hard” on the “Q stuff” in his campaign messaging. This included a campaign website that had QAnon slogans hidden in the metadata.

Arizona has become ground zero for Trump’s reimagined Republican Party, where GOP lawmakers openly embrace election lies and QAnon conspiracies. Arizona was host to the bogus recount effort in Maricopa County last year, has a Trump-endorsed, QAnon-linked candidate seeking to become the state’s top election official, and is of course now home to Ron Watkins, the QAnon influencer who is currently running for Congress. And let’s not forget, Arizona is also home to Wendy Rogers.

Along with his QAnon affiliation, Steinbart has also been in legal trouble for hacking the medical records of celebrities while receiving treatment in a facility in March 2020. He pleaded guilty to one felony charge in 2021, and was released after spending 225 days in prison.

Steinbart also got in trouble with the authorities in September 2020, after he was found to be using a fake penis, or “Whizzinator,” to avoid taking a routine drug test while out on pre-trial bail, the Daily Beast reported.

Davison has defended his campaign manager’s actions. In an interview on the right-wing Jim Price Show, Davison said Steinbart had been “set up” by the FBI, and that someone had been creating “dummy websites” for his campaign.

Steinbart also appeared on Price’s show this week, promising that Davison would be a “nuclear-grade redpill for the country.” He also said that he was explicitly creating campaign promotional material that wasn’t overtly pro-Trump, in an attempt to help Davison win over Democratic voters.

But it’s not just law enforcement who views Steinbart with suspicion. Among the wider QAnon community, Steinbart is almost universally derided as a kook, with most of the biggest influencers dismissing his claims about time travel and being Q.

Davison is up against four other Republican candidates in the Republican primary on August 2, the winner of which will face incumbent Democrat Rep. Greg Stanton in November. The frontrunner is Tanya Wheeless, a former Phoenix Suns executive and chief of staff to former Sen. Martha McSally. Davison has raised the least amount of money for his campaign, as of March 31.

Want the best of VICE News straight to your inbox? Sign up here.