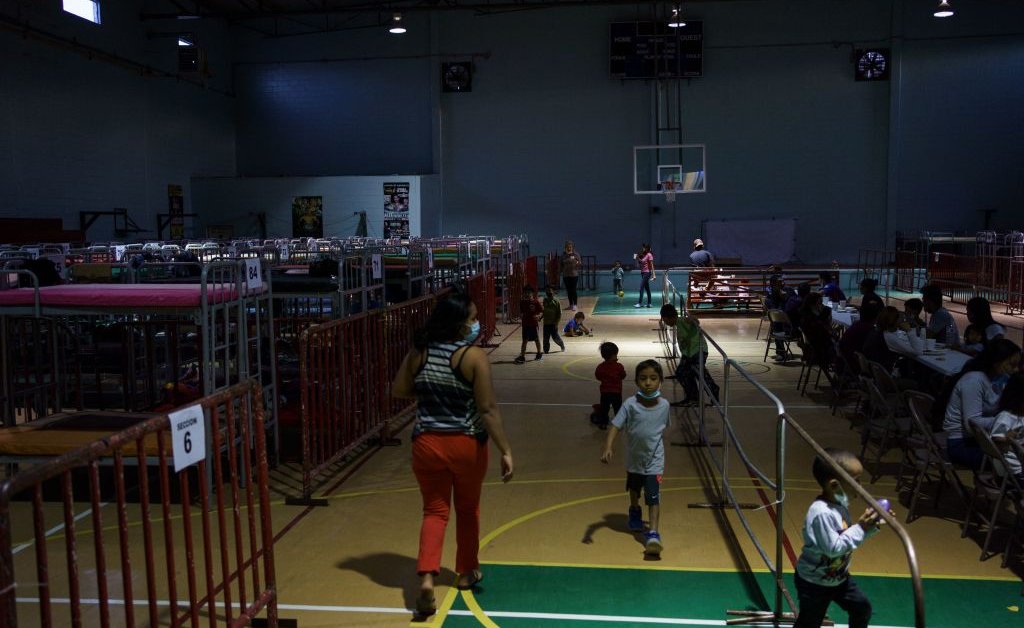 About a dozen young kids zigzag across the floors of the basketball court in the Kiki Romero gymnasium in Ciudad Juárez, the sound of their laughter and squeaking sneakers reverberating off the baby-blue walls—nearly the same color as the pullover sweatshirts many of the older men in the gym are wearing. Some of the kids gather around the basketball hoop, taking turns to see if one of them can score.

But the spirited scene is misleading. This isn’t basketball practice, and the men’s matching sweatshirts aren’t uniforms; they’re the clothes U.S. immigration officials have given them to wear while in custody before returning them to Mexico. The young basketball players are living in this gymnasium with their parents, who have come mostly from Central America. They have no where else to go.
[time-brightcove not-tgx=”true”]

It’s here—between El Paso, Texas, and Ciudad Juárez, just a stone’s throw south of the border—that the latest iteration of the so-called “Remain in Mexico” policy is playing out. The Migrant Protection Protocols (MPP), as the policy is known officially, was designed by the Trump Administration and requires migrants who request asylum in the U.S. to wait in Mexico for their court proceedings. The Biden Administration, despite attempting to end the policy in June, was compelled by court order to reinstate it. On Dec. 6, the U.S. Department of Homeland Security (DHS) relaunched the policy in El Paso and Juárez, and are expected to begin implementing it in other parts of the U.S.-Mexico border soon. Earlier this year, the city of Juárez repurposed the gym into a shelter for migrants attempting to enter the United States.

So far it has mostly been single adult men that U.S. Customs and Border Protection (CBP) has placed in the newest iteration of MPP, according to researchers at Human Rights First, a nonprofit research and advocacy organization, who observed in person the relaunch of the policy. The MPP roll out process has so far not led to overcrowding at Kiki Romero, and with the help of donated goods, shelter coordinators appear to currently be able to meet many of the needs of the people staying there.

But, human rights advocates say, it’s too early to put their guards down. They worry about what will happen when international organizations leave, when the latest wave of COVID-19 arrives in force at the border, or when the public’s attention moves on from MPP.

A need for shelter

At the Kiki Romero shelter, the basketball court is mostly taken up by dozens of rows of bunk beds. Half the court is for the children and their families, the other half is for single adult men who are migrating alone. Each section of beds is separated by a steel barrier.

Today there are about 120 people staying there. “We can fit 400 people, but should we?” Santiago González, the head of Juárez’s office of human rights, tells me in Spanish. “You have to weigh humanitarian needs, and too many people squeezed into one place isn’t healthy or safe.” Though the migrants who have just been enrolled in MPP are tested for COVID-19 and receive the vaccine while in CBP custody, they must share space with others at the shelter, who may not yet be vaccinated.

Similar to the first iteration of MPP, which lasted between January 2019 and June 2021, migrants who present themselves to border officials to make a claim for asylum are placed in CBP custody for several days of processing before being released to Juárez. Some of the men are presenting themselves to officials at other parts of the border and being flown to El Paso to be released in Juárez, according to Human Rights First. After they are released from U.S. custody, they walk across the bridge to Juárez and are tested by the United Nations High Commissioner for Refugees for COVID-19. After that, they are transported straight to Kiki Romero, about six miles south of the port of entry.

About 70 of the people staying at the shelter at the moment are MPP enrollees, González estimates. The rest are a mix of migrants who simply needed a place to stay or who were expelled by the U.S. through another Trump-era American policy known as Title 42, a health care measure U.S. officials have been using since March 2020 to immediately return to Mexico anyone who attempts to cross the U.S.-Mexico border, even if they wish to make a claim for asylum, because of the risks posed by COVID-19. Most people attempting to cross are still being expelled under Title 42—under the Biden Administration nearly one million expulsions have taken place, according to a TIME analysis of CBP data—and a significantly smaller number of people so far have been enrolled in MPP. According to Human Rights First, 114 people were enrolled into MPP during the first week it was reimplemented.

For many, Kiki Romero is just a temporary stop, González says, comparing the shelter to a filter system. Some of the people newly enrolled in MPP will be able to make their own accommodations in the city and leave after a few days. MPP enrollees can also be transferred to other Juárez shelters designed for people with specific needs or vulnerabilities—there are shelters for women, or shelters for LGBTQ+ people, for example.

Targeted because of their shoes

The Kiki Romero shelter relies on donated goods, including food, medical supplies and cleaning products. But what they often most need is shoes. On Mondays, volunteers Karina Breceda and Jennifer Bustillos deliver boxes full of shoes to the shelter. Throughout the course of MPP and Title 42, shoes have become a way to identify migrants who have just been released from CBP custody, making them vulnerable to attackers.

For years, migrants have been released by U.S. officials to dangerous Mexican border cities wearing shoes that were missing shoe laces, making them easy to spot (U.S. immigration officials require people in custody to remove shoelaces for safety purposes). Now, many of the people being enrolled in MPP and released to Mexico are wearing lace-less slippers or sandals that are sometimes colored bright orange, also easily identifiable. Violent crime against migrants in border cities is rampant—Human Rights First has documented 1,500 reported cases of violence, including murder, rape and kidnapping, during the first iteration of MPP. It has also documented more than 7,600 cases of violence against migrants in Mexico as a result of Title 42.

While crowds of people gather around Breceda and Bustillos to let them know their shoe sizes, on the other side of the gym El Paso Bishop Mark Seitz, along with organizers at the Hope Border Institute, a Catholic immigration policy, research and advocacy nonprofit, meet with a group of about a dozen men who were recently enrolled in MPP. They seem to range in age from early 20s to middle-aged, but they’re nearly all wearing the same baby blue sweatshirt provided by CBP. One man from Honduras introduces himself, then another from Nicaragua. Another man talks about how CBP custody as “psychologically stressful.” Then they all bow their heads and let Bishop Seitz guide them in preyer. (Kiki Romero shelter coordinators allowed TIME into the shelter on the condition that migrants living there not be interviewed out of concerns for their privacy and safety).

“So many people in the United States, they have no idea, they’re just so removed from the reality here,” Seitz says as we sit in Kiki Romero’s administrative offices—a converted Zumba studio. “It’s just numbers to them.”

Read more: ‘This Is For My Son’s Life, My Wife’s Life.’ The Migration Journey to the U.S. Continues Despite Complicated Border Policy

The next morning, I make my way to the Stanton Street Port of Entry, the international bridge where migrants newly enrolled in MPP are released every day. It’s a relatively quiet bridge compared to other ports of entry along the El Paso border that see hundreds of people cross back and forth every day in cars and on foot.

At around 9:30 a.m., agents open the doors to a parked Border Patrol vehicle and out come four men, all wearing baby blue sweatshirts and carrying nothing but paper documents. They are escorted across the bridge by CBP and Border Patrol agents and I lose sight of them after only a few minutes. It’s easy to imagine them heading to Kiki Romero.