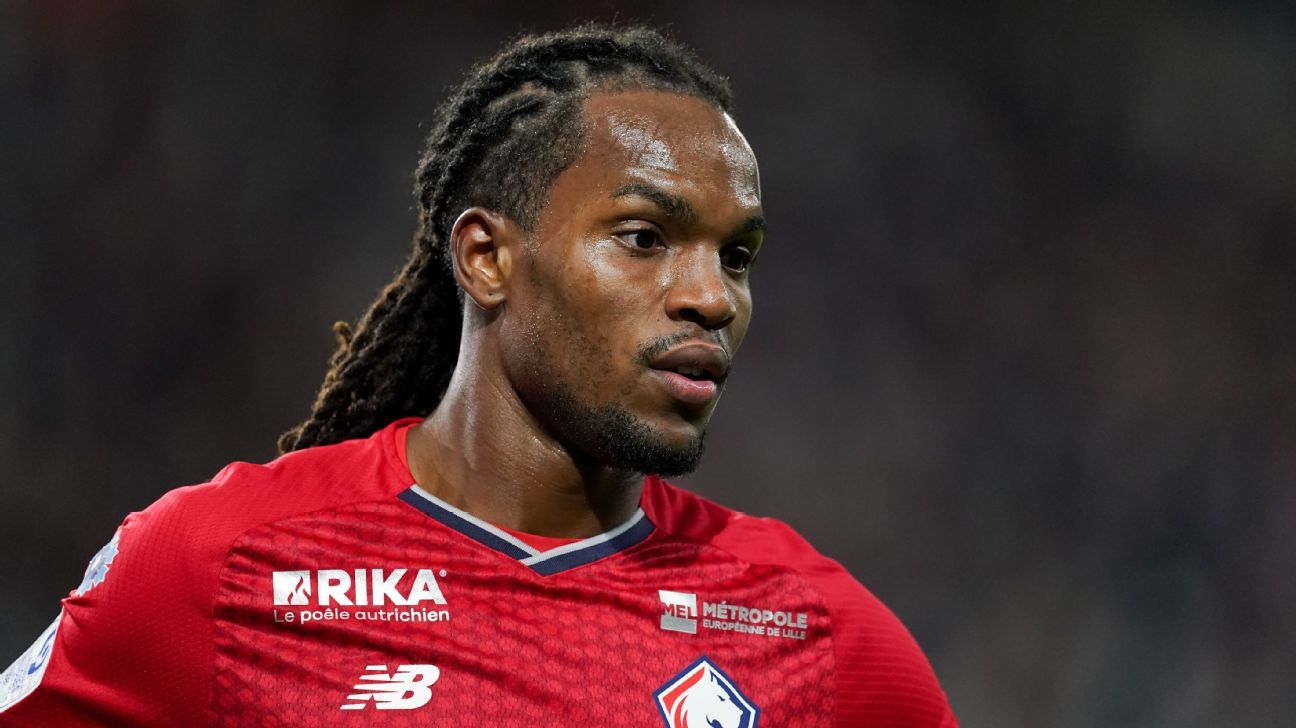 The January transfer window is fast approaching and, naturally, all the gossip on who’s moving where is heating up. Transfer Talk brings you all the latest buzz as we count down to the 2022 winter window.

TOP STORY: Could Sanches go back to Bayern?

Bayern Munich are interested in Lille midfielder Renato Sanches, writes Calciomercato. The 24-year-old has publicly spoken about an exit from the Ligue 1 champions, with a number of clubs linked with a potential move.

Bayern are now said to be pursuing a return for the Portugal international, who played for the Bavarians between 2016 and 2019. In that time, he made 53 appearances, winning the Bundesliga twice, the German Cup and three German Super Cups.

Sanches then moved on to Lille in 2019 for around €20 million, becoming a key player with 74 appearances for the club. His deal with the club expires in 2023.

Both AC Milan and Arsenal have previously been linked with a move for the former Golden Boy winner.

15.27 GMT: Roma right-back Bryan Reynolds hasn’t set the world alight since moving to the club and could be allowed to depart on loan in January, says Calciomercato.

Reynolds, 20, only signed permanently from FC Dallas this summer but hasn’t played much under Jose Mourinho so far this season. Now the United States international has caught the eye of English Championship side Hull City and Belgian team Club Brugge.

14.50 GMT: Enzo Fernandez has committed his long term future to River Plater after signing a new deal until 2025, setting his release clause at €20m.

ESPN Argentina reports that River would like Julian Alvarez to follow the same footsteps and sign a contract, but negotiations with the 21-year-old forward won’t be as easy as he is being chased by a number of European clubs including Man United, Juventus, Bayern Munich, AC Milan and Atletico Madrid.

14.22 GMT: Sao Paulo are in advanced talks with Aston Villa over the loan signing of Wesley Moraes, according to ESPN Brazil.

The Brazilian forward joined Villa in the summer of 2019 but was sent on loan to Belgian side Club Brugge.

Palmeiras have expressed interest in his services, but ESPN Brazil reports that Sao Paulo are confident of winning the race for his signature.

ESPN Deportes reports that at least two of these clubs have already approached Atlanta United to sound out the former Tigres star’s availability.

Damm, 29, still has two years left his contract with Atlanta but could consider returning to Liga MX to increase his chances of making the World Cup 2022 squad.

13.30 GMT: Fiorentina striker Dusan Vlahovic is going to be a superstar and will be attracting plenty of attention in January.

13.03 GMT: Diego Simeone has refused to comment on possible January deals at Atletico Madrid, backing his existing squad to turn the team’s fortunes around.

Atletico — who travel to Granada on Wednesday — have lost their last three LaLiga games, the club’s worst run in Simeone’s decade in charge.

“At this moment the only thing that interests me is the game tomorrow,” Simeone said in a news conference on Tuesday when asked about potential reinforcements. “I believe in my players. They’re working hard and they’ve played well, although the results aren’t showing it. If I have anything, it’s patience.”

Simeone also backed Luis Suarez, who hasn’t scored in seven matches, to regain his form, saying “the team needs to put him in situations close to the box where he’s at his best.”

12.40 GMT: Real Madrid are willing to listen to offers for Eden Hazard in 2022, Cadena COPE reports.

Hazard, 30, started his first game in three months in Madrid’s 0-0 draw with Cadiz on Sunday, and impressed in the second half.

According to the radio station, the Belgium international forward wouldn’t be keen to move in the January transfer window and would prefer to decide his future next summer, although his €13m-a-year salary would be an obstacle for potential suitors.

12.06 GMT: New York City FC star Valentin Castellanos says he would like to play in Argentina one day but his priority is to make a move to Europe

Castellanos, 23, helped his side to their first MLS Cup triumph this season, scoring 22 goals. Asked whether he would return to his homeland to play one day, he told told ESPN Argentina: “Yes, I would. Obviously, it’s a desire I have, because I’ve never played in Argentina. But I don’t think the time is right now. I want to target European football. It’s reality, it’s my dream, I always wanted to be in football there. My focus is this. Today I have many offers from Europe.”

ESPN reported last week that the forward is being chased by a number of Premier League clubs including West Ham.

11.43 GMT: Barcelona are still trying to move on Philippe Coutinho over the next transfer window, says Sport.

Coutinho, 29, is the highest paid player left at Camp Nou after a summer of exits to aid the club’s battle with their €1.4bn debt.

One of his agents, Kia Joorabchian, has close ties with Arsenal so naturally the Gunners have been linked for months, while Newcastle and Everton are also looking for new blood in a central attacking area.

11.22 GMT: Kylian Mbappe‘s move to Real Madrid is “looking good” according to Zinedine Zidane’s former No. 2 at the club, David Bettoni.

“He’s always said he’d like to play for Madrid,” the coach — who’s now looking for a managerial job himself, with Zidane taking a break — told newspaper Marca in an interview on Tuesday. “I’d say it’s looking good. After that, I don’t know what’s going to happen, because he’s at a great club that is fighting to win the Champions League.

“For Madrid he’d be a great signing. An attacking trio of [Karim] Benzema, Vinicius Jr. and Mbappe is one to dream about.”

10.55 GMT: Borussia Dortmund want to meet with Erling Haaland to clarify his future plans, Diario AS reports, with the Bundesliga club hoping to convince him to stay until 2023.

Speculation about the star forward’s next club has reached fever pitch in recent weeks after agent Mino Raiola said there was a “big chance” the 21-year-old moves next summer naming Real Madrid, Barcelona, Bayern Munich and Manchester City as possible destinations.

According to AS, the German club will offer Haaland a substantial pay rise to keep him at the club for one more year — which would suit Madrid, who could focus their efforts on Kylian Mbappe next summer before moving for Haaland a year later.

10.13 GMT: Inter Milan striker Edin Dzeko is a target for Newcastle, according to The Sun.

Dzeko, 35, has eight goals in 17 Serie A appearances and is still showing himself to be a key player even at the latter stage of his career.

The Bosnia & Herzegovina international has experience of Premier League football, having played for Man City from 2011-16, while Newcastle are looking for a goal scorer.

09.41 GMT: Tottenham midfielder Dele Alli is on the radar of both Newcastle and West Ham, says Eurosport.

Alli, 25, impressed in the 2-2 draw with Liverpool on Sunday but has struggled with his form over recent seasons and could be allowed to depart in January.

A stay in England is possible, though the report suggests that his agent is also looking at clubs abroad as well.

09.18 GMT: The PSG players were keen to show Kylian Mbappe how long they want him to stay at the club. Sign him up now!

“Mbappé 2050” during his birthday celebrations together with his teammates. 👕 #PSG pic.twitter.com/F9v0TnrbOh

08.52 GMT: Inter Milan vice-president Javier Zanetti has played down reports that the Nerazzurri are after River Plate striker Julian Alvarez.

Alvarez, who has also been linked with Real Madrid, has enjoyed an impressive season scoring 24 goals and setting up 15 more in 46 appearances in all competitions for the Argentine giants.

The 21-year-old, who has a contract with River until the end of 2022, recently revealed he doesn’t know if he will continue at River Plate beyond January.

“There are many clubs interested in Julian Alvarez,” former Argentina international Zanetti said.. “It’s logical. He has had a great season. It’s not easy to be the striker at River and prove what he is proving.

“We are complete in all our lines. The reports [of an Inter interest in Alvarez] are just rumours. Julian Alvarez has a big future ahead of him but Inter’s present is elsewhere.”

The 25-year-old winger’s deal expires at the end of next season, and previous talks over extending his stay at the Allianz Arena past 2023 had broken down.

However, the Bundesliga champions and the player who scored their winning goal n the 2020 Champions League final are now reportedly back around the table discussing a new deal.

Alejandro Moreno sounds off on Barcelona getting eliminated from the UCL group stage for the first time since the 2000 season.

– Barcelona are hoping to sign Edinson Cavani, according to Sport; however, it will depend on whether Anthony Martial leaves Manchester United. Cavani, 34, has struggled for minutes since Cristiano Ronaldo signed in the summer, but the Red Devils are only letting one striker move on in January, with Martial also linked with a move to Newcastle United that could keep the Uruguay international from moving to LaLiga.

– ESPN Deportes reports that a return to Liga MX could be in the works for MLS stars Jonathan dos Santos and Rodolfo Pizarro. While Chivas and Monterrey are the rumoured clubs that are interested in bringing Pizarro, Club America are apparently leading the chase for Dos Santos. The only stumbling block is the high salary of each player.

– Atletico Mineiro are eyeing a potential move for Manchester City midfielder Fernandinho, reports Ekrem Konur. The 36-year-old’s deal at the Etihad expires in the summer after nearly nine years at the club, but the Brazilian outfit could make a move in January.

– Fiorentina are ready to activate a clause in midfielder Lucas Torreira‘s loan deal that would allow him to join from Arsenal permanently, according to Nicolo Schira.

– Napoli have joined Chelsea in the race for Fenerbahce defender Attila Szalai, writes Calciomercato. The Blues have been rumoured to have interest in the 23-year-old centre-back; however, Napoli are hoping to add another defender in January to replace Kostas Manolas, who joined Olympiakos last week.

– Barcelona, AC Milan and Arsenal are interested in striker Yuri Alberto, reports Mundo Deportivo. The 20-year-old has impressed for Brazilian side Internacional, who would expect a transfer fee of around €15m, with a number of European clubs eyeing a potential move.