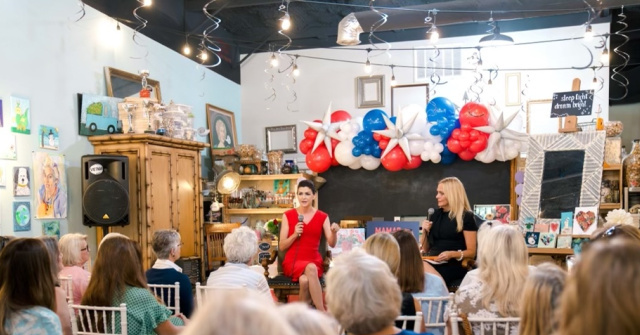 Florida’s first lady, Casey DeSantis, launched an initiative this week called Mamas for DeSantis to mobilize one million moms in support of her husband, Gov. Ron DeSantis (R), calling for a “slam dunk” victory months ahead of the governor’s reelection battle in the Sunshine State.

The organization —  the biggest organization of parents in Florida history — will work to mobilize “Florida moms, grandmas, abuelas, nanas, and more to get involved in the re-election campaign,” according to a campaign press release, which notes that the initiative will include paid media as well as digital advertising.

The organization has the goal of signing up one million moms across the state ahead of the November election, where DeSantis could face off against Democrat Rep. Charlie Crist (D-FL) or Florida Agricultural Commissioner Nikki Fried, both of whom have been supportive of lockdowns, mandates, and restrictions.

The first lady held her first public event for the initiative on Wednesday, speaking at a fireside chat in Niceville at Jojo’s Coffee and Goodness.

“Ladies, you’re a part of this!” Casey DeSantis said at the event. “It’s all about mamas, grandmamas, nanas, aspiring moms, who want to get on board to support the Governor. With this coalition, we’re going to win, and we need to win a slam-dunk election.”

“We have a goal. We want to get a million moms, aspiring moms, grandmoms, abuelas, everyone to sign up, because we want you on our team,” she continued, emphasizing the need for a “slam-dunk election because it shows that if you have a backbone, you stand up for what you know in your heart is right, you don’t read the headlines, and you’re guided by principle, people will have your back.”

“And that’s what the governor did,” she said. “What we want to do is get as many folks on board, and we know when you want to get something done, you go to a mama.”

Indeed. Gov. DeSantis, particularly over the last several months, has taken bold steps to ensure that parents — not bureaucrats — are empowered in his state, signing legislation this year to continue to root out Critical Race Theory (CRT) in schools and making the Parental Rights in Education bill a reality despite a steady stream of falsehoods touted by Democrats and the establishment media, who falsely labeled the legislation “Don’t Say Gay.” However, the bill itself does not ban a word or phrase, simply barring classroom discussions on sexual orientation and gender identity for children in kindergarten through third grade. And as it turns out, most parents support anti-groomer laws similar to the Sunshine State’s Parental Rights in Education law.

“I am proud to have Casey by my side, and I am grateful for the example she sets for our three children. And now, I am excited to work alongside her as we launch the biggest parental rights movement in history,” DeSantis said in a statement.

“We are working every day to make Florida the most pro-parent state in the nation, and Mamas for DeSantis gives a voice to mothers across the state,” he added.