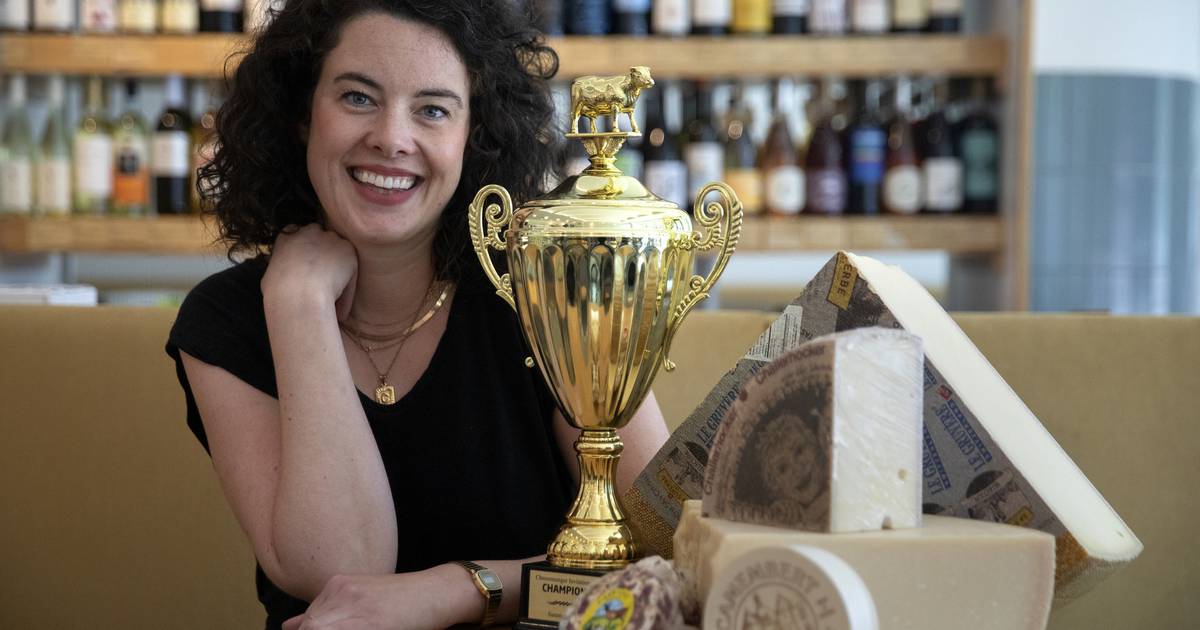 As she sliced a cheese wheel and speed-wrapped blocks in front of 800 screaming fans, Cara Condon forgot she hates crowds. The 2022 Cheesemonger Invitational’s buzzing audience couldn’t bother the Chicago cheesemonger. It was almost like she was behind the glass.

The Tinley Park-born cheese expert, who works at Logan Square’s Beautiful Rind cheese shop, won the invitational, a biannual competition in Brooklyn, New York, on June 12 where some of the world’s best cheesemongers competed in tasks involving technical skill, cheese knowledge and salesmanship and where spectators might need Lactaid pills.

Flashing cameras made it hard for Condon to focus on her cheese quiz in the competition’s first round. The questions were similar to ones she saw years ago on the American Cheese Society’s Certified Cheese Professional test — the cheesemonger equivalent to the bar exam. But the gram-to-pound conversions seemed more difficult under pressure.

[ 5 great cheese plates worth seeking out ]

In the next round, a blind taste test, Condon had to figure out the name, milk type, cheese type, country of origin and age of five random cheeses. Cutting and wrapping competitions followed. Condon’s experience trimming slices at Beautiful Rind, where employees get to ring a bell when they cut a perfect quarter-pound piece, helped her make it through.

“It’s a weird way to feel like a badass,” she said.

In the salesperson round, Condon was tasked with recommending a cheese to a hypothetical woman hosting a graduation party for 10 people. There were pregnant guests, she was told. She recommended Mt. Tam and Rispens.

Both are “interesting without being alienating, crowd-pleasing without being boring,” she said. Plus, the Mt. Tam would pair well with the party’s strawberries and was pasteurized for any theoretical expectant mothers, she added.

In another part of the competition, Condon was told to present a “perfect beverage” and a plate to pair with Challerhocker, a Swiss winter variety.

“Mongers kind of go crazy for it,” Condon said. She set out to accent its summery flavors: a pineapple tint and low roasting notes reminiscent of bitter chocolate or coffee. She ultimately settled on a one-to-one mix of Galliano Ristretto coffee liqueur and pineapple juice with a dried orange wheel.

The amaro-like drink “tasted so much better than it sounds,” she said. She paired the cheese with almond brittle, Lady Edison ham, cherry mostarda and rum raisins for her “perfect plate.” In the “perfect bite” round, she matched her assigned Rogue Creamery Caveman Blue with chocolate almond stout ganache, orange-soaked cherries and thyme on mini toast.

Those efforts got her into the Cheesemonger Invitational’s top five. A friend tossed her a golden Michael Jordan Bulls jersey as the finals ensued.

Her journey to the stage wasn’t unlike Jordan’s to the 1996 finals. She had been laid off from cheese gigs twice over the last two years. This championship was, in part, redemption.

She cruised through the cheese-trivia round. In the Saran Wrap competition, she put a near-perfect plastic on her hunk in seconds. The next four contests — speed cut, speed wrap, perfect cut and perfect wrap — went well too, she said.

Still, Condon couldn’t hide her disbelief when the judges panel announced she came in first, she said. She earned $1,000 and trips to cheese production facilities in America and Europe.

Few would have predicted the now-undeniable strength of Condon’s palate when she preferred Kraft singles, colby jack sticks and cheese Pringles as a child.

But after tasting Wisconsin’s Pleasant Ridge Reserve post-college, Condon decided to learn more about the food. She quit a warehouse job and took on work at the now-closed Lakeview Pastoral cheese shop.

At first, she could only recommend four basic cheeses — the reserve, Quadrello, Prairie Breeze cheddar and an easy brie.

“Those were the only ones I knew,” she said.

But her co-workers’ passion inspired her. Together, they shared knowledge and pored over cheese books and online forums. She learned about the whole display case, she said.

A big part of her job is sharing the stories of the small-scale, more sustainable cheese producers and their products that Beautiful Rind sells. When she looks at a wheel now, it’s not just cheese she sees, she said.

“Getting to know the faces and hands behind the cheeses is huge,” Condon said.

The shop has Condon’s Cheesemonger Invitational trophy on a shelf behind the wheel-filled cheese case. It’s been a “whirlwind week” for Beautiful Rind, owner Randall Felts said. He thinks that the cheese expertise found in the shop makes it stick out from other retailers.

“We want to be knowledgeable and approachable. We want it to be accessible to everyone,” Felts said. He started the shop in part to create a workspace that would provide more sustainable pay and benefits to cheesemongers.

Condon said she can’t pick a favorite cheese. She eats Ossau-Iraty with her coffee many mornings.

“The other night, for dinner, I ate a whole wheel of Harbison,” she added.

Condon went to the Cheesemonger Invitational primarily for the two days of learning with other cheesemongers that preceded the competition, she said.

The cheese industry brings in all kinds of people, she said, from English college majors well-equipped to tell stories to people raised on dairy farms following the family business. The ones she meets in the inclusive space have taught her to view the dairy product as a sort of metaphor for life, where care and intention ultimately make good things possible.

“Cheese has given me a community that is unwavering in their support and friendships that have carried me through a lot of rough times. It’s so much more than cheese,” Condon said.