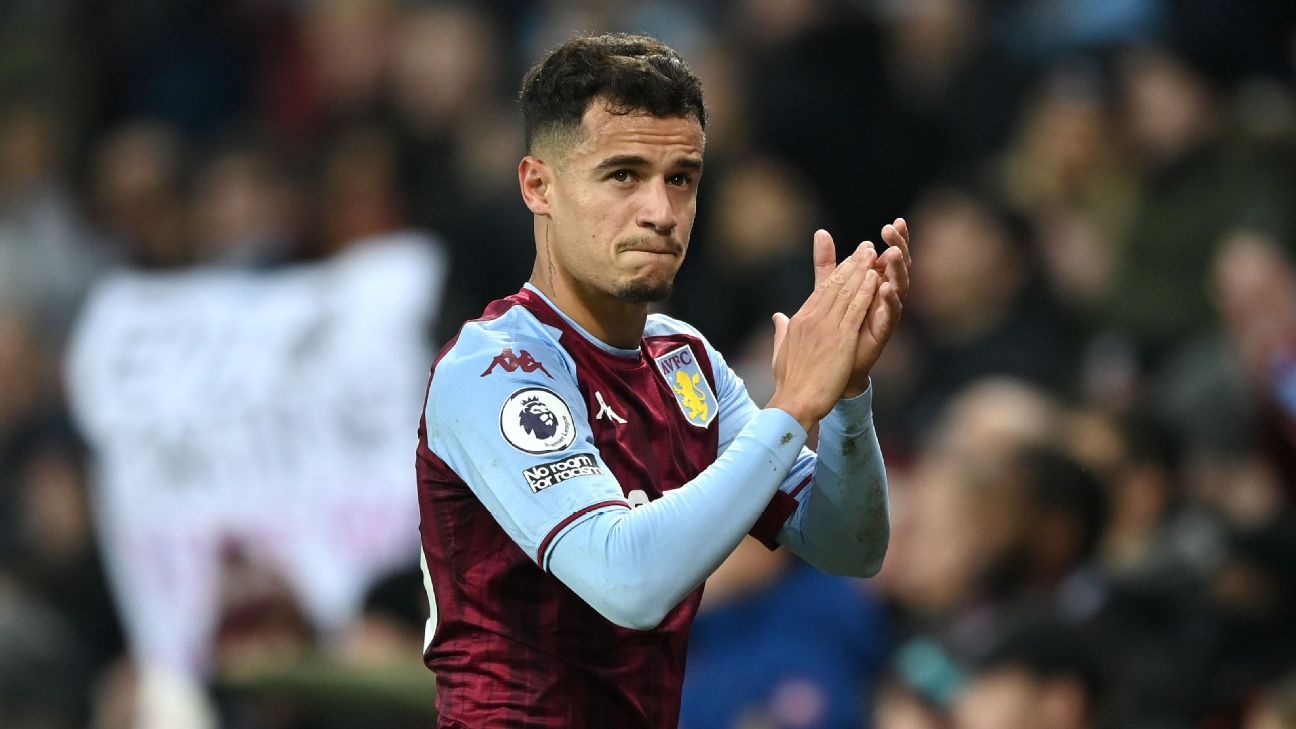 BIRMINGHAM, England — Manchester United are in a run of form so shaky that even when things are going well there’s always a chance it might end badly, and despite controlling much of the game against Aston Villa, they still left disappointed. From 2-0 up with 13 minutes to go at Villa Park, Ralf Rangnick’s team managed to concede twice in five minutes, and by the end were left asking referee David Coote to call time on the 2-2 draw.

For the travelling United fans, it was made worse by watching Villa’s comeback orchestrated by former Liverpool man Philippe Coutinho. The Brazilian’s loan move from Barcelona was only confirmed on Wednesday, but in the 22 minutes he was on the pitch here, he scored one and made one to make himself an instant Villa hero.

He walked down the tunnel to chants of “Philippe Coutinho” before the home fans turned on United, singing “2-0, and you messed it up” — except they didn’t use “messed.” Either way, it was a fair assessment.

“It’s difficult to speak about positives,” admitted Rangnick afterwards. “The first half hour we dominated the ball, we didn’t concede one single shot on our goal, but it’s about playing in that way and as compact as we did in the first half hour but we have to do it in a longer period of time.

“It definitely feels like two lost points, it almost feels like a defeat after being 2-0 up. What we showed was a step forward, but it is about getting the results, it feels like two points lost and given away.”

In a battle with Arsenal, Tottenham Hotspur and West Ham United to finish fourth this season, United cannot afford to throw away points.

Victory would have moved them to within three points of West Ham — currently fourth — with a game in hand, but instead they remain seventh and looking up at the rest. Even in January, it has the feeling of one of those results that could make Rangnick wince when he sees the final table in May.

United, who were without Cristiano Ronaldo and Marcus Rashford because of injury, were gifted the lead after just six minutes when Emiliano Martinez let a tame effort from Bruno Fernandes slither through his legs and over the line. They have missed Fernandes’ goals; after getting 28 last season, this was just his second since September. As scruffy as it was, it helped United produce a performance in the first 45 minutes that was as good as any under Rangnick.

With fireworks going off and Coutinho brought out onto the pitch early to wave to the fans, Villa Park was bouncing by the time the game kicked off. It’s the type of atmosphere that has had United wilting in the past, but the early goal laid the foundation for a mostly calm, competent display that took the sting out of the occasion.

Rangnick has been asking for “control” ever since walking through the door, and for 70 minutes, he got it.

“For me it was one of the best performances since I came here six weeks ago,” Rangnick said. “We controlled the game and in the first half hour could’ve been 3-0 or 4-0 up.

Fernandes got his second on 67 minutes with a crisp finish off the crossbar after Fred had picked off a poor pass from Morgan Sanson.

Dan Thomas is joined by Craig Burley, Shaka Hislop and others to bring you the latest highlights and debate the biggest storylines. Stream on ESPN+ (U.S. only).

In the home game against Villa in September, the Portugal midfielder missed a late penalty to make it 1-1 and his season hit a low point from which it never really recovered, but here he offered up a reminder about how important he still is. As he slid across the turf to celebrate in front of the United fans, there was little to suggest they wouldn’t go home happy, but a little more than 10 minutes later their corner of Villa Park had gone quiet.

Jacob Ramsey, with the help of Coutinho, pulled a goal back and then laid on a tap-in for Coutinho to score his first Premier League goal since Liverpool’s 5-0 win over Swansea on Boxing Day 2017.

“It is a good start,” Villa manager Steven Gerrard said about his former teammate. “We’ve brought a quality footballer to the club.”

Coutinho, without a game for more than a month, looked shattered well before the final whistle, but his intelligent movement and darting passes had already changed the game. With Lucas Digne also making his debut following his move from Everton, there is an excitement at Villa ahead of the second half of the season.

After another disappointing result, the same can’t be said for United.