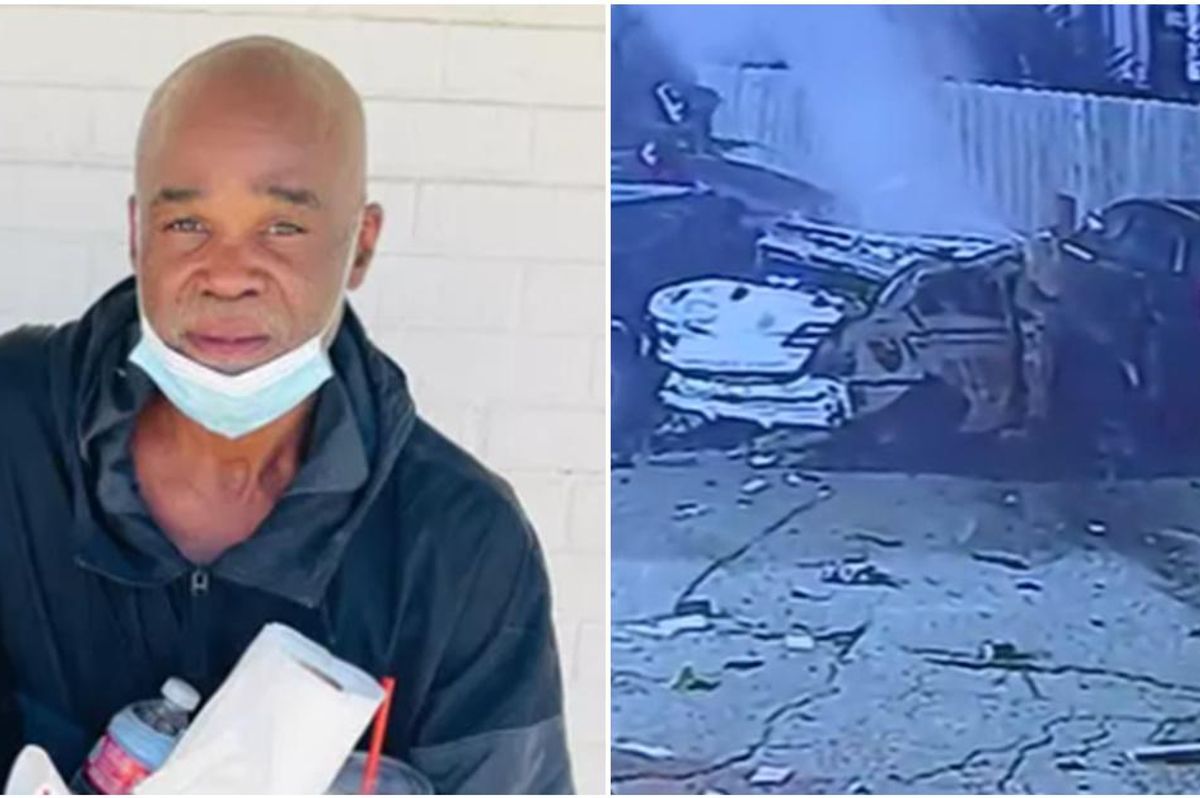 A sheriff’s deputy in Houston, Texas responded to a call about a robbery at a CVS on Wednesday night. When he arrived, he saw a man getting into a car that matched the description he heard on the scanner.

The deputy attempted to stop the man but he sped off, sparking a pursuit. The chase led the deputy to an intersection where he was involved in a crash with six other cars. Surveillance footage shows the deputy’s car rocketing into a parking lot in front of a store.

The police car was mangled, wedged between two other vehicles, and it caught fire. A man experiencing homelessness was at the scene and rushed to help.

“I’m homeless. I was doing some work for someone. I was taking some tools back when I heard ‘boom, boom, boom, boom, boom,'” Johnny Walker told ABC13. “I ran out here to see what it is and I saw a lot of cars, but I paid attention to the fire. My instincts were to go to that car and help him out, because he was crushed in on both sides.”

Even though the car was smoldering, Walker bravely rushed over to assist.

“Sometimes you have to make a choice. That car was on fire. I could lose my life,” Walker recalled.

While Walker put his life on the line, a crowd of people stood and stared.

“Nobody was trying to make an effort, so when I went on one side, couldn’t get in. I jumped over the car, two more youngsters came and jumped behind me,” Walker said. “We pulled him. I opened the door and got him out. We picked him up, put him over the car, took him inside the store.”

The deputy was unconscious when they got him into the store to safety. “He came to when we were checking his pulse. I kept talking to him, ‘Stay with us. Help is on the way,'” Walker added. An ambulance arrived on the scene and the deputy was taken to a local hospital.

Tragically, a woman died at the scene of the crash and two children were admitted to the hospital. “I think I was at the right place at the right time, being homeless,” Walker said while tearing up. “I tried to help that lady. She passed though.”

The Harris County Sheriff’s Office says that the deputy is in stable condition and it is “praying that he makes a full recovery.”

The suspect who was being pursued fled the scene and has yet to be apprehended.

When reports of Walker’s heroics hit the news, he was reunited with his family who had been looking for him since Christmas Eve. After hearing from numerous people who wanted to help, his sister, Monica Collins, set up a GoFundMe page to help him get counseling and a home.

“He’s a good-hearted person that has been through a lot of hard times,” she wrote on the GoFundMe page.