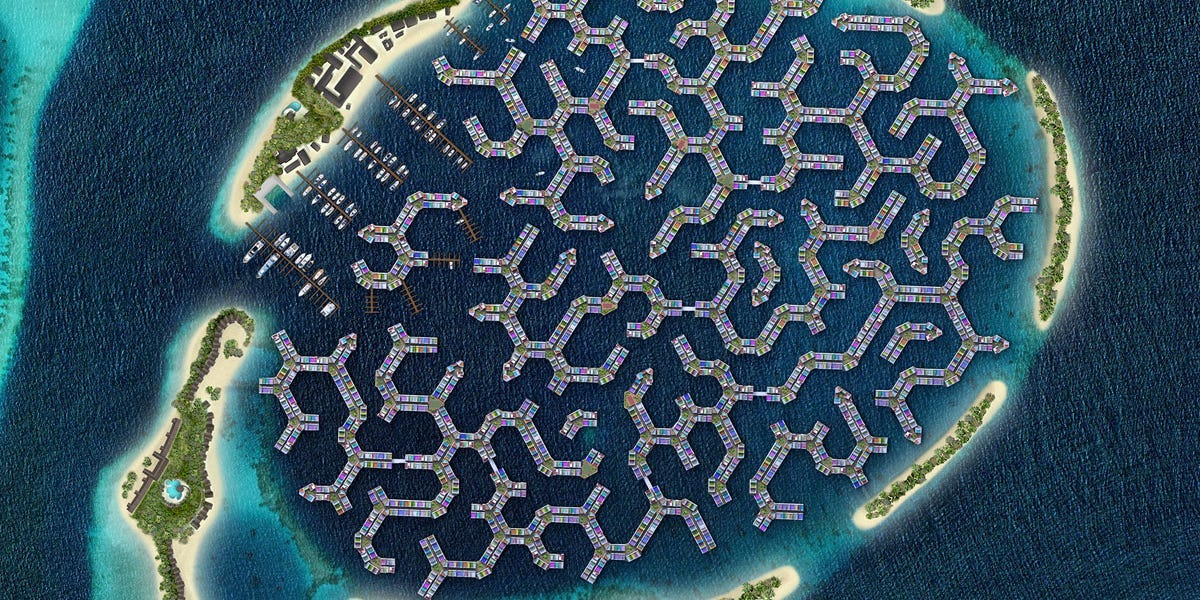 A Dutch architectural firm is on a mission to create a floating city located just 10 minutes away from Male.

The Maldives Floating City, designed by Dutch firm Waterstudio, is an expansive mass of modular floating platforms in the pattern of a brain coral.

Koen Olthuis, the founder of Waterstudio, the architectural firm behind the city, told Insider that the project is a collaboration between the Dutch Docklands, a local developer, and the local government in Male. One of its aims is to free up more room for housing on the mainland.

Olthuis told Insider that building the floating city would also offer a solution to the threat of rising sea levels for generations to come.

“It will be a walkable city with floating streets, utilizing boats for the transport of goods and people within the city, and to the capital city of Male,” Olthuis said.

He added that the cost of living in the city itself would be comparable to local land-based developments in the Maldives.

According to CNN, the city will be opening up its first units for viewing this month, with prices starting at $150,000 for a studio apartment, and going up to $250,000 for a family home. The developers expect residents to begin moving into the island in early 2024, with the whole city due to be completed by 2027.

Per the developer’s press release, the city will comprise modular, hexagonal segments connected to an outer ring of barrier islands. The bottom portion of the city will be attached to stabilizers that buttress it against the waves while also keeping the buildings and structures safe against the current.

The idea for the Maldives Floating City is similar to that of Oceanix, a concept for a floating city made up of interconnected platforms. Busan, a port city in South Korea, has agreed to host the UN-backed project, which is set to accommodate around 12,000 people.

Patrick Verkooijen, the CEO of climate think-tank the Global Center on Adaptation, told CNN that he thought the idea of a floating city was a good solution to rising sea levels.

“The cost of not adapting to these flood risks is extraordinary,” Verkooijen told the outlet. “We have a choice to make: we either delay and pay, or we plan and prosper. Floating offices and floating buildings are part of this planning against the climate of the future.”