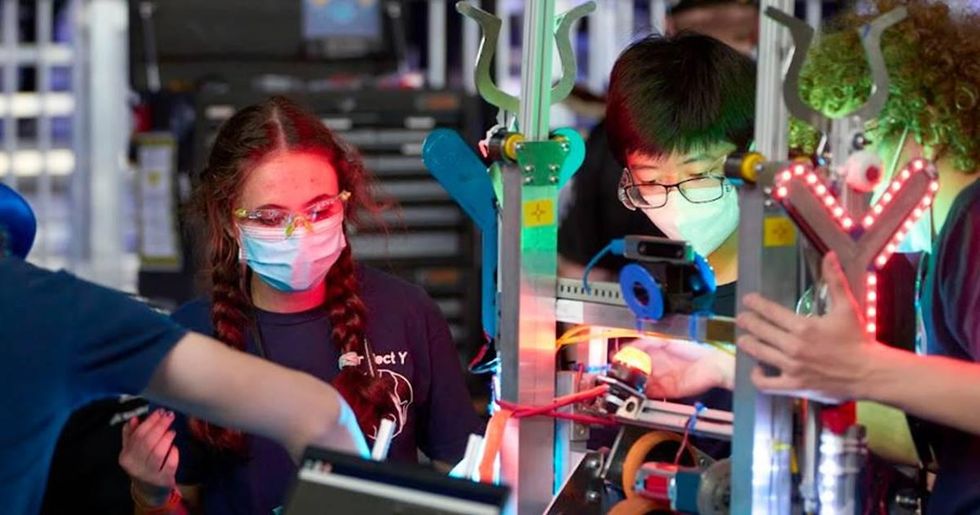 In today’s rapidly changing world, most parents are concerned about what the future looks like for their children. Whether concerning technology, culture, or values, young people today are expected to navigate—and attempt to thrive in—a society that’s far more complicated than that of their parents. It’s one of the reasons why parents are keen to involve their kids in activities that will help them become more resilient, well-rounded and better prepared for life when they enter adulthood.

One such activity is FIRST®, a volunteer-based global robotics community that helps young people discover a passion for science, technology, engineering and mathematics (STEM) through exciting, multifaceted challenges. FIRST helps kids ages 4 to 18 to build confidence, resilience, cooperation and empathy as they compete and collaborate with one another.

You may have seen the transformative power of FIRST programs featured in the new 2022 Disney+ documentary “More Than Robots.”

Through FIRST, students develop skills to help them thrive in changing times while connecting them with skilled mentors from as many as 200 Fortune 500 companies. These connections often lead to job placements in high-paying and rewarding STEM careers.

“If you want your child to be ready for the real world in ways that school and classroom experiences won’t necessarily fully prepare them for, FIRST is the program for you,” Erica Fessia, vice president of global field operations at FIRST, told Upworthy.

A wonderful example of the impact FIRST has on students is Aaron, who lives in Watts, an underserved neighborhood in south Los Angeles. Aaron was a reserved kid until he joined FIRST, where he developed a passion for robotics that pushed him to become a leader of his team, the aptly named TeraWatts.

Fatima Iqbal-Zubair, a schoolteacher and TeraWatts mentor, has seen Aaron make tremendous strides over the past two years. “He’s one of the most technologically competent students on our entire team. But I am 500% more proud of his growth as an individual in his confidence and his leadership,” she said, noting it’s the type of growth she rarely sees through traditional educational settings.

Aaron believes he has learned resilience through the program due to its fail-forward approach to engineering. “Normally, I get really frustrated when I can’t solve a problem,” he told Upworthy. “Robotics helped me to calm down instead of getting angry. If you don’t get it right the first time, you just keep trying, trying until you do.”

Problem-solving is an important goal of engineering and FIRST inspires students to stretch the limits of their innovation and imagination to reach their goals. When each annual FIRST season begins, student teams are assigned a sport-like challenge, typically themed around a critical global issue like recycling, transportation or energy, and are asked to build a robot that can compete in that challenge. They are given a kit of materials with limited instructions. It encourages them to experiment and attempt new iterations until the robot works.

When the students hit a roadblock, they can get help from adult mentors with either educational or professional experience in STEM fields. This provides the invaluable experience of working with positive role models who’ve made STEM their life’s work. It’s a big reason why FIRST students are better prepared for STEM careers than those who’ve only studied the subject in school (that is, if they even have access to STEM education in their school).

Afzaa Rahman has been a FIRST student for seven years as a member of the Durham, North Carolina-based Zebracorns. After high school, she hopes to pursue a degree in biomedical engineering.

“The Zebracorns have a special place in my heart as they have provided me with a community of individuals who stood by my side, willing to assist, support, encourage and motivate me in my endeavors,” she told Upworthy.

She hopes that being part of FIRST will inspire other girls to do the same. “It’s important that we leave our mark and continue to make meaningful contributions to STEM fields,” she said. “By participating in STEM, today’s girls and women will inspire future generations to do the same until we are no longer a minority.”

Afzaa’s father, Mujib Jinnah, encourages other parents to involve their children in the program, too. “I think other parents should definitely consider having their child participate in FIRST. In addition to STEM learning, FIRST encourages the development of teamwork and soft skills, which are essential qualities to enhance from a young age,” he told Upworthy.

One of the most important goals of FIRST is to recruit women and students from underserved or underrepresented communities into the program to help bridge the gap in STEM participation. This can help uplift individuals and communities by putting their issues directly in the hands of a new generation of problem-solvers.

“When we talk about diversity in technology, we talk about bringing more voices into technology,” Fazlul “Fuzz” Zubair, systems engineering department manager at Raytheon Technologies and mentor of FIRST team The Vitruvian Bots, told Upworthy.

“When young people of all backgrounds learn they can get into technology, they bring the issues they see to the forefront and say, ‘I can solve this with technology.’ That way you don’t just get technology that’s developed for one class of people,” said Zubair. “We need more developers from underserved areas because they understand the issues.”

FIRST robotics challenges inspire competition and cooperation—what it calls Coopertition®. Two teams may be competing alongside one another in a challenge and then later compete against each other. To make this work requires another FIRST value: Gracious Professionalism®, a term coined by the late Dr. Woodie Flowers, a distinguished MIT professor emeritus and a pioneer in hands-on STEM education, including many years spent tirelessly supporting FIRST.

“The ethos of Coopertition and Gracious Professionalism encourages all who participate in the FIRST community to emphasize and respect the value of others and their opinions, including those that might differ and differ strongly from yours,” Fessia said.

Iqbal-Zubair says that, win or lose, the unique nature of the competition builds practical empathy that students won’t learn elsewhere.

“You can be kind to a team and understand what they’re going through in one competition. Then, work against them in the next and be gracious in both situations. That takes a lot of empathy,” she said. “FIRST requires technical empathy, emotional empathy and strategic empathy,” she added.

Keys to thriving in a world where change is happening at a breakneck speed are resilience and flexibility as well as the 21st-century skills of cooperation and empathy. FIRST students are developing those skills while building some pretty amazing robots, too!

FIRST is open to students from the ages of 4 to 18. To learn more about FIRST programs in your area and how to become involved, go to firstinspires.org.