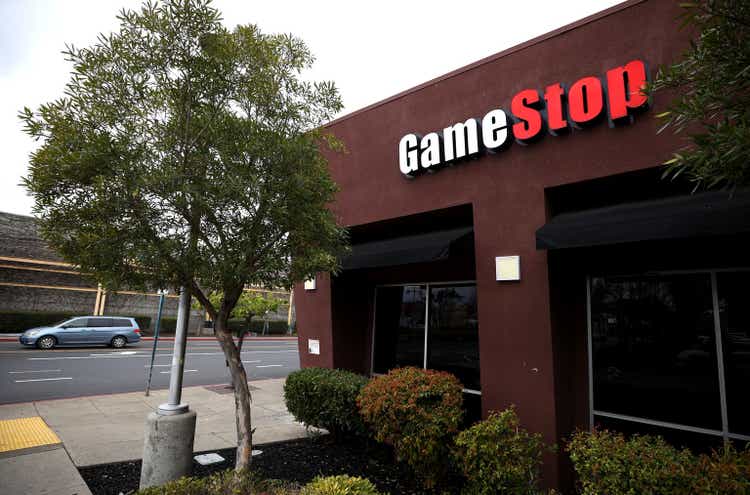 This article was prepared by Lasan Devasirinarayana in collaboration with Dilantha De Silva.

GameStop Corp.’s (NYSE:GME) efforts in evolving from a video game retailer to a more diversified software company are reflected in the quarterly sales figures in Q1 FY 2022, with Software segment revenue surging 21.6% YoY to $483.7 million from $397.9 million in the corresponding quarter previous year. The contribution from the Software segment to net sales soared to 35.1% in Q1 FY 2022 from 31.2% in Q1 FY 2021. Additionally, the Collectibles segment revenue gained 25.9% YoY to report revenue of $220.9 million, contributing 16% (Q1 FY 21 – 13.7%) to the total revenue. GameStop, despite an underwhelming performance in its primary segment, Hardware and Accessories, recorded an overall net sales growth of 8% YoY to $1.38 billion for the quarter. The Hardware and Accessories segment revenue declined 4.2% YoY to $673.8 million compared to $703.5 million in the previous year on the back of supply chain bottlenecks and temporary store closures.

GameStop operates a total of 4,573 retail stores worldwide with 3,018 stores in the United States and 1,555 stores across Canada, Australia, and Europe. U.S. stores contributed 72% to the total revenue in Q1 FY 2022, registering a YoY growth of 3%, but the contribution fell from 76% in the same quarter the previous year. Achieving growth rates of 34.2% and 24.2%, respectively, stores in Europe and Canada seem to be capitalizing on e-commerce operations, pushing the contribution from these respective regions to 13% (Q1 FY 21 – 10%) and 6% (Q1 FY 21 – 5%).

Despite reporting better than expected revenue, GameStop did not manage to beat the previous year’s benchmark at the gross profit level with gross profit declining 9.6% YoY to $298.5 million for the quarter. A decline in dollar-based revenue further worsened the profitability by 420 basis points to pull the gross profit margins down to 21.7% from 25.9%. We believe a shift in product and sales mix towards lower margin categories primarily caused this deterioration, in addition to increased freight costs, incremental inventory reserves, and heightened competition, as pointed out by the management.

The video game industry is becoming highly competitive with new players entering the market, while big retailers such as Walmart Inc. (WMT) Target Corporation (TGT), and Best Buy Co., Inc. (BBY) are also attempting to grab their fair share in this market. Furthermore, with the advancement of technology, consumers can now download games and entertainment software via the Internet, which is likely to hurt the company’s retail stores going forward. Unless GameStop makes proactive measures to make a considerable change to its traditional business model and align it with its software business, we believe the company would be another Eastman Kodak Company (KODK) or Blockbuster amid the rise of disruptive technologies.

The large number of brick-and-mortar stores across all 50 states in the U.S. operated by GameStop already appears quite costly for the company amid increasing SG&A expenses, resulting in a loss of $144 million in Q1 FY 2022, a deterioration from the loss of $3.6 million reported in Q1 FY 2021. Meanwhile, all the other regions saw an improvement in operating margins compared to the previous year, along with Australia becoming the only region to report positive operating profits of $1.6 million for the quarter.

The total SG&A of GameStop increased 22.1% YoY to $452.2 million for the quarter, while as a percentage of net sales, this is a 3.8% extra burden on the company compared to the previous year. However, we feel that the company is incurring costs on correct instruments towards its transformation to become a technology company. GameStop is actively investing in skilled human capital who are capable of making this mission a reality, while also making investments in technology to support growth and expansion of fulfillment capabilities. The above costs were partially offset by the lower store occupancy costs resulting from the cost reduction measures implemented by the company. GameStop has permanently closed 132 stores since May 01, 2021.

The company entered into and also expanded existing brand relationships with hardware giants in the gaming industry including Alienware, Corsair Gaming, Inc. (CRSR), and Lenovo Group Limited (OTCPK:LNVGY). GameStop also recently partnered up with Immutable X Limited to support the development of its NFT marketplace. The company is set to receive digital assets in the form of IMX tokens upon completion of certain milestones.

We forecast GameStop’s capital expenditure to continue at around 1% of net sales for the next three years, while more physical store closures would set off the negative cash flows up to a certain extent to keep the cash balance afloat.

We believe GameStop will continue to see thin to negative operating margins in the short to medium term amidst transformation efforts, however, leaving some longer-term optimism for investors. The company sits quite comfortably in terms of liquidity with cash and cash equivalents standing strong at $1.04 billion at the end of Q1 FY 2022, slightly lower than the preceding quarter’s $1.271 billion. The cash position is noticeably better than the corresponding quarter in the previous year primarily due to cash inflows from the issuance of common stock.

Despite future growth prospects on the digital front, we remain skeptical about the company’s ability to stay competitive and will continue to monitor how GameStop performs in this saturated market. Just because GameStop was involved in the meme stock saga last year, we are not ready to look past the positive developments. At the same time, we are not ready to invest in the company unless GameStop can address some of the major concerns that we have highlighted in this article.