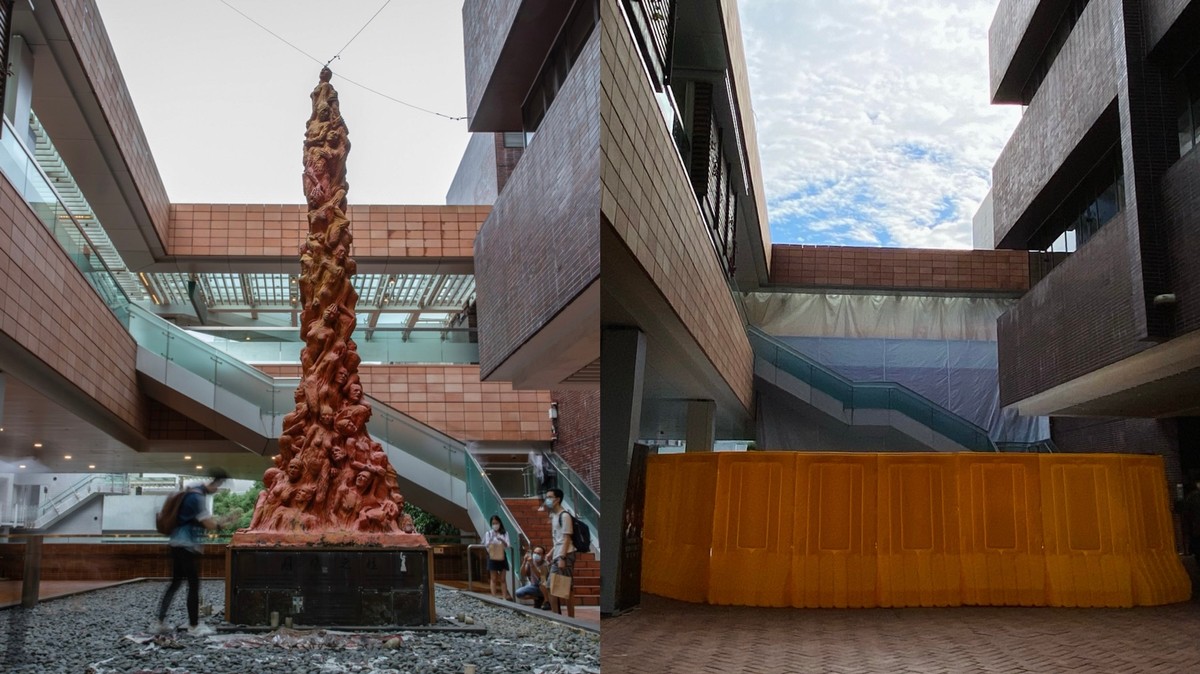 The site of the Tiananmen memorial before (left) and after it was removed. Photo: Alex Chan Tsz Yuk/SOPA Images/LightRocket via Getty Images (left) and Viola Zhou

A prominent monument dedicated to victims of the Tiananmen crackdown has been removed from Hong Kong’s top university, in another symbolic blow against political freedom in the city.

The eight-meter tall sculpture used to sit outside a busy cafeteria at the elite University of Hong Kong, and was once a symbol of the unique freedoms enjoyed in the former British colony compared to mainland China. The Tiananmen crackdown, which saw unarmed protestors killed by security forces in Beijing in 1989, remains highly taboo on the mainland and banned from public discussion.

Until its removal, it was the most prominent Tiananmen monument on Chinese soil. Anticipating its impending demolition, residents had spent recent months visiting the campus to take photos with it.

But now the statue is gone. Late on Wednesday night, with most students out on winter break, workers arrived on the campus to dismantle the sculpture behind plastic shields. Hours later, they put parts of the statue into a shipping container, which was carried away on a truck.

On Thursday morning, the former site of the sculpture, cordoned off by yellow barricades and white sheeting, was empty.

The university said the sculpture was removed due to safety concerns and legal risks, citing the city’s crime ordinance enacted under Hong Kong’s former colonial government, without providing details on the supposed breaches. It said in a statement on Thursday that the statue would be “put in storage” as the university seeks legal advice on what to do with it.

As part of its handover from Britain to China in 1997, Hong Kong was promised civil liberties not seen on the mainland. But Beijing has slowly eroded freedoms ever since, cracking down on 2019 pro-democracy protests and enacting a national security law, which critics say will cement the Communist Party’s grip on the territory and stifle dissent even further.

Since the security law went into effect in June 2020, many opposition leaders have been arrested or forced into exile. Pro-democracy groups have disbanded, and pro-democracy politicians were barred from running in elections. Police have also banned Hong Kong’s annual Tiananmen anniversary candlelight vigil, the biggest in the world, for two years in a row, citing COVID-19 health risks.