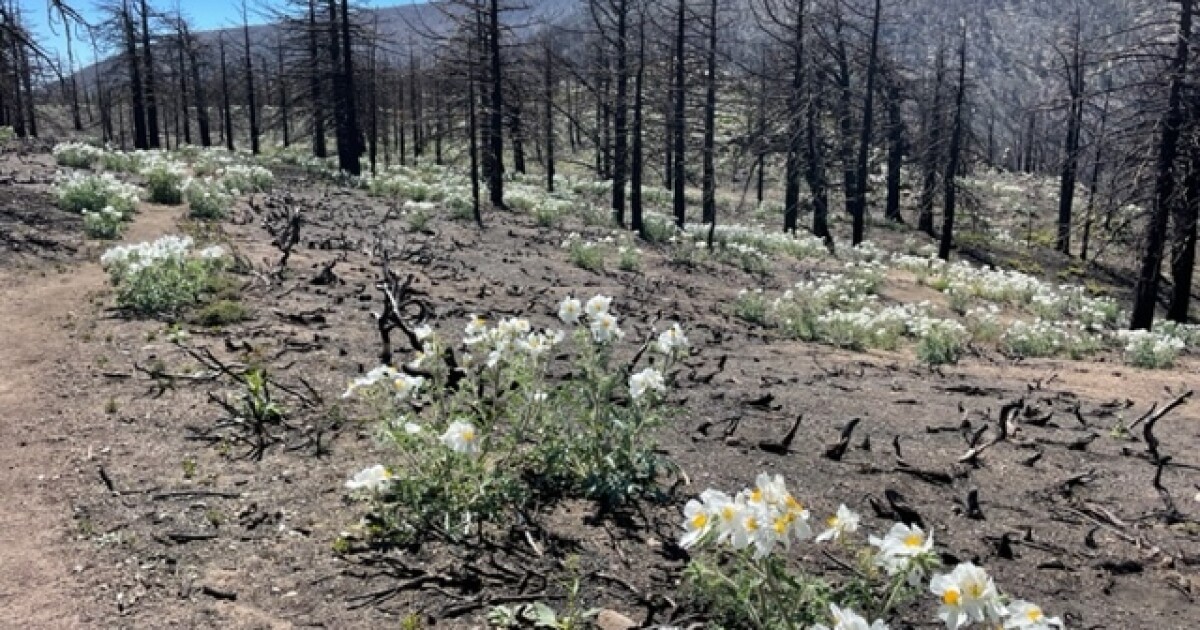 Nothing can be more surprising than the charred landscape of a heavily burned forest — except for a surprise superbloom covering the ground where the forest once stood.

Last week I hiked in part of the San Bernardino Mountains severely burned by the El Dorado fire in 2022. It was beautifully strange or strangely beautiful, I’m not sure which. The thick manzanita bushes that used to line the uphill trail toward San Bernardino Peak are gone. The pines that provided shade and a big-forest feel are gone too, unless you count the dead and blackened trees that still stand.

Something else has taken over the landscape: prickly poppies (Argemone munita). The blooms — short and stocky bushes with yellow-centered flowers amid large white petals — covered the sides of the trail and surrounding hillsides. The farther I walked in, the more flowers I saw. This wasn’t the forest I knew, but the poppies brought life to the otherwise barren ground, as stunning as they were unexpected.

“This landscape is definitely in post-fire transition,” native plant expert and California Botanic Garden staffer David Bryant wrote in an email. “The prickly poppies will likely dwindle in number as the chaparral canopy recovers. Seeds will likely wait in the natural seed bank until another triggering fire or disturbance event.”

It’s worth hiking in to see the spectacle; it may not last much longer.

If you go: The San Bernardino Peak Trail starts at a trailhead near the fire station in Angelus Oaks on Highway 38. Drive in less than half a mile on a dirt road and park; you’ll need a day hiking permit and an Adventure Pass ($5).

The trail to the 10,649-foot summit is a long, hard slog of 16.5 miles round-trip with 4,670 feet of gain. But you only need to walk in a few miles to see the poppypalooza. In the first mile, you’ll see a profusion of lilac-colored penstemon and golden wallflowers lining the path. From the second mile onward, you’ll see the prickly poppies for miles. I suggest making Manzanita Flats your destination to see the flowers and the forest in transition. It’s 4.2 miles each way on the easy-to-follow trail.

3 things to do this week

1. Take your kids (or anyone, really) to an animal encounter. Not all nature outings come with a guarantee that you’ll see animals. Consider going to a place that’s certain to have sightings, like the Star Eco Station in Culver City, which houses exotic wildlife confiscated by federal authorities. A bobcat, fox, hedgehog and birds (a roomful) are some of the animals to see ($12 for adults; $10 for kids). The Bunny Museum in Altadena has plenty of faux bunnies and bunny memorabilia (45,134 items, according to its website) — and at least one real rabbit (free admission). Check out more places to see animals in SoCal.

2. Learn to identify native herbs on an Ojai preserve walk. Author and plant expert Lanny Kaufer (“Medicinal Herbs of California”) will lead an easy walk in the Ojai Meadows Preserve. You’ll learn how to identify native plants that have been used by Chumash and other Indigenous people in California and about the restoration of the wetlands by the local Ojai Valley Land Conservancy. 5 to 7 p.m. June 29, $25 per person; register in advance.

3. Enjoy a free outdoor fest at Eaton Canyon Natural Area in Altadena. Eaton Canyon is one of those close-to-home destinations that has hiking trails and a popular (read crowded) waterfall. The nature center presents a day filled with activities, from 9 a.m. to 3 p.m. It starts with a bird walk, followed by an animal ambassadors event, story time and a presentation about coyotes. There’s also classical music in the wild by Insert Music Here. A piano will be set up under the oaks and amplified by speakers using solar panels. More information here.

What’s believed to be the world’s largest freshwater fish, a giant stingray, was caught by a fisherman June 13 in the Mekong River in Cambodia. “At half the length of a bus, the gargantuan freshwater stingray may be the largest fish swimming in freshwater on Earth today,” according to the World Wildlife Fund’s website.

The giant stingray measured 13 feet and weighed almost 660 pounds, according to an AP report. Scientists put a tracking device near the fish’s tail before releasing it June 14. The device will allow them to follow the stingray for a year and gather “unprecedented data on giant stingray behavior in Cambodia.”

This probably won’t come as a surprise, but the wildfires that took over SoCal — and sent smoke and particulate matter as far east as Boston — created really bad air quality, something that can have very enduring consequences. “Even as the COVID-19 pandemic took cars off the road and temporarily halted some industries, particulate pollution — widely considered one of the greatest threats to life expectancy — soared to some of the highest levels in decades in parts of California in 2020, according to the Energy Policy Institute at the University of Chicago, which produces the report estimating how air pollution may reduce life expectancy,” an L.A. Times story said. Also, the fine particulates in the air from wildfires are more dangerous than other sources of combustion.

Federal wildlife officials have long relied on thinning trees and prescribed burns (small, controlled fires set to remove debris) to lower the risk of wildfires and maintain healthy forests. Lately some California forest plans have come under attack. Last week I mentioned a plan in Big Bear Lake that would remove tens of thousands of pine, fir and oak trees deemed to be “overgrown, unhealthy and vulnerable to drought and disease.”

Now there’s a thinning plan already underway in Yosemite National Park. It will be one of the largest federal logging efforts ever conducted in the park. “The project authorizes crews to remove thousands of standing dead trees and healthy ponderosa pines, white firs and incense cedars to reduce the fire risk to Yosemite Valley, the Merced and Tuolumne groves of giant sequoias, habitat for rare species including Pacific fishers and great gray owls, and communities including El Portal, Foresta and Yosemite Village,” according to an L.A. Times story. The Earth Island Institute in Berkeley has filed a lawsuit to stop the project.

With so much happening in the world these days, you may have missed news about a crucial wildlife bill making its way through Congress. The Recovering America’s Wildlife Act would fund efforts — to the tune of $1.39 billion annually — to keep endangered and threatened species from going extinct.

Three years ago, a comprehensive U.N. report documented an “unprecedented” decline in nature and warned that 1 million species were threatened with extinction. Why should we care? Because what’s good for spotted owls or snail darters is good for us too, Margaret Renkl wrote in a New York Times op-ed piece.

“We are not apart from nature. We are a part of it. Whatever happens to the air that spotted owls breathe, and the water and soil that feeds the forests they dwell within, also happens to the air we breathe, the trees that filter the carbon we produce, the water we drink, the climate that affects it all.” The bill recently passed in the House and now heads to the Senate.

I cannot muster any ill will toward jacarandas. The transplanted trees paint Southern California purple with their blossoming tree canopies in spring. For me, bringing such beauty to our urban landscapes offsets whatever happens after the sticky purple flowers fall from trees and cover city streets.

Not so for columnist Gustavo Arellano. He openly hates jacarandas (ugh!) and compares them unfavorably to other transplanted trees that he says contribute more to L.A.: “Citrus established our reputation as a subtropical paradise and also sowed the seeds of political activism for Mexican Americans who tired of toiling in orchards. You can turn eucalyptus leaves into all sorts of tinctures and remedies. Loquats are every bit as messy as jacarandas but are at least edible and delicious — same with figs. Ficus trees and their sidewalk-breaking roots offer copious shade. Palm trees transport you to the beach or the desert. The only place jacarandas take you is to a dustpan, a broom or a scraper.”

Ouch! I say the cleanup is worth the purple magic. What do you think? Tell us at TheWild@latimes.com

Speaking of trees, they may be one of our best defenses against extreme heat. The city seeks to plant about 90,000 new trees as part of L.A.’s Green New Deal — a task that’s harder than it sounds. “With just over 65,000 trees planted to date, officials are finding that their reliance on city residents to plant and care for the trees comes with significant limitations: Residents in poorer neighborhoods who don’t own land can find it difficult to actually plant trees, or they encounter problems caring for a new trees during their critical three-year establishment phase,” according to an L.A. Times story. Other trees fall prey to vandalism.

But the number of trees isn’t as important as the location. Some areas of the city (like downtown L.A.) are in desperate need of tree canopies. What can you do? Even during the historic drought, Angelenos are urged to continue to water and keep trees alive. You can pick up free trees to plant at City Plants and volunteer to plant and care for trees with organizations like TreePeople.

Enjoying this newsletter? Consider subscribing to the Los Angeles Times

Your support helps us deliver the news that matters most. Become a subscriber.

Send us your thoughts

Share anything that’s on your mind. The Wild is written for you and delivered to your inbox for free. Drop us a line at TheWild@latimes.com.

Click to view the web version of this newsletter and share it with others, and sign up to have it sent weekly to your inbox. I’m Mary Forgione, and I write The Wild. I’ve been exploring trails and open spaces in Southern California for four decades.