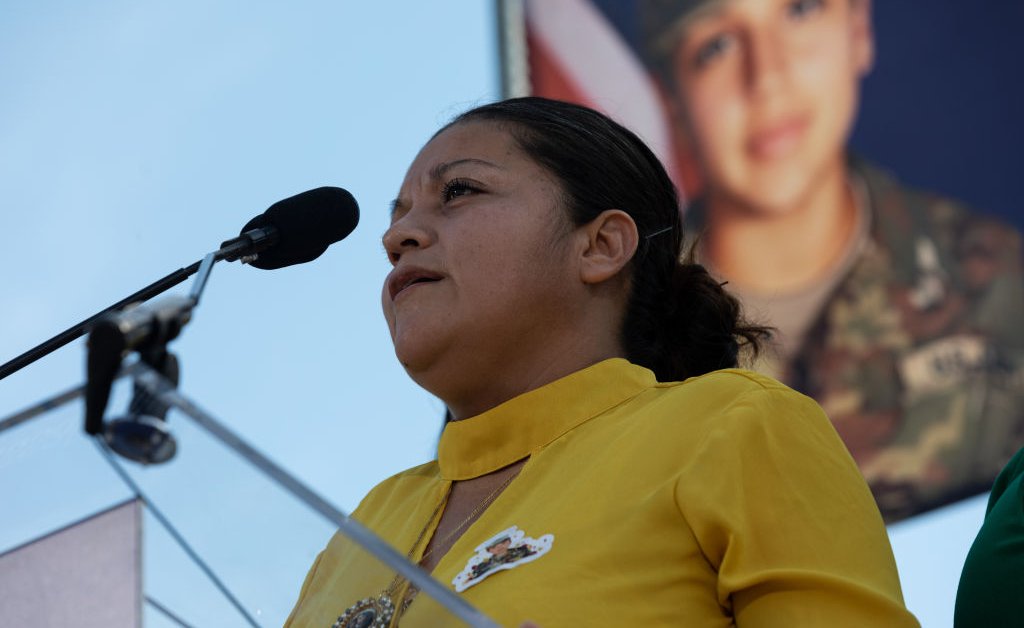 Mayra Guillen has been too busy to grieve her younger sister, Vanessa Guillen, who was murdered in April 2020.

In the year and a half since Vanessa’s death, a good chunk of Mayra’s time has been spent caring for her parents, particularly her mother, Gloria Guillen, who became ill after Vanessa died, and her four younger siblings. But nearly all of her remaining days—Mayra estimates about 80% of her time, total—has been spent advocating for federal legislation that would improve sexual assault misconduct reporting. If such legislation had existed before 2020, Mayra believes it could have saved her sister’s life.
[time-brightcove not-tgx=”true”]

“If [these measures were] in place at the time that my sister needed it, then things would be very different,” says Mayra, 23, in a Skype interview from Florida. “I’d rather my sister be honored than forgotten.”

Mayra is, at last, seeing the fruits of her months of personal advocacy. On Dec. 15, the U.S. Senate passed the National Defense Authorization Act (NDAA) for Fiscal Year 2022, which includes a measure making sexual harassment a crime for the first time in the Uniform Code of Military Justice. It also changes how service members can report incidents of sexual misconduct, reducing conflicts of interest and adding extra layers of protections for victims of harassment and assault.

Mayra, as well as her family’s lawyer, Natalie Khawam, were present in the Senate Chamber to witness the vote. The NDAA is headed to the President’s desk for his signature. Though the NDAA doesn’t include all the changes that Mayra and her family would like to see, it feels like a victorious first step—the culmination of the Guillen family’s twenty-month foray into advocacy, coalition and lobbying at the highest levels of government.

A tragedy that sparked a movement

Vanessa Guillen was a 20-year-old soldier at the Fort Hood Army Base near Killeen, Texas when she disappeared on April 22, 2020, shortly after telling her mother that she had been sexually harassed by a fellow soldier. Roughly six weeks later, on June 30, Vanessa’s remains were discovered close to Leon River in Bell County, Texas. Hours later, Army soldier Aaron Robinson, who is believed to have been Vanessa’s killer, shot himself dead.

The stark tragedy of Vanessa’s death ignited a massive, online explosion of activism that many have compared to the #MeToo movement, during which millions of women worldwide took to social media to share experiences of sexual misconduct in the workplace. Within days of Vanessa’s disappearance, thousands of U.S. servicewomen, posting from around the world, shared on social media their stories of sexual harassment and assault—common experiences that for decades have plagued all the branches of the U.S. Armed Forces. Many used #IamVanessaGuillen in their posts. Many lawmakers credit this social media movement for creating the political will to change the way the military has historically handled reported cases of sexual misconduct.

The Guillens, along with Khawam, the lawyer who Mayra says has become like family, built on the power of that grassroots movement to pressure leaders and lawmakers to take action. Over the last year and a half, they led rallies in Washington, D.C. and in Fort Hood and Houston, Texas; met with former President Trump; and lobbied lawmakers, who later introduced bills named after Vanessa. Mayra often split her time between advocating in the Capitol and witnessing a criminal case in Waco, Texas against Cecily Aguilar, Robinson’s girlfriend who is accused of aiding in the dismemberment, burning and hiding of Vanessa’s body.

It has been an exhausting time, Mayra says. “I’ve had my days where I don’t want to talk to anyone or know anything,” she says. “Then I think back to myself, ‘You can’t afford to do this, you have to get back up and finish the task.’”

Progress hardly happened overnight. “At this point last year it was all no, no, no, and it was very saddening to see that nothing was taking place,” Mayra recalls. But a hallmark of the Guillen family’s fight was that they seemed unwilling—despite extraordinary challenges—to let up.

“We have been very persistent,” Khawam says sternly from her home in Florida. “That’s the nicest way to put it.”

A major triumph, years in the making

Khawam, who has represented military personnel in the past, says she helped strategize with the Guillen family in their effort to change military procedure on sexual misconduct through legislation.

In 2018, Khawam represented Marine Richard Stayskal, who suffers from a fatal form of lung cancer that military doctors should have detected years earlier, he claims, leading to Congress granting service members the right to file medical malpractice claims against Department of Defense health care providers in the 2020 NDAA.

Khawam was able to apply some of the tactics she learned on Capitol Hill during the Stayskal case—like convincing lawmakers that supporting the cause could be mutually beneficial—to a new effort, one the Guillen’s were eager to take part in.

Legislators and the Department of Defense (DOD) have long known that sexual assault and harassment in the military is a prevalent issue. According to DOD estimates, 135,000 active duty service members have been sexually assaulted in the last 11 years, 509,000 have experienced sexual harassment during the same period. For a decade, legislators have been attempting to reform the way sexual misconduct has been handled in the military, but have so far been unsuccessful—until the case of Vanessa Guillen.

Historically, victims of sexual assault or harassment would report their abuse to their commanding officer—typically non-lawyers—who would control the investigatory and disciplinary processes. Opponents of that system have argued that it creates conflicts of interest, and leaves victims especially vulnerable when their abuser was their commander.

The new provisions in the NDAA remove the commander from making decisions related to the prosecution of crimes including rape, sexual assault, murder, manslaughter, and kidnapping, according to a House Armed Services Committee summary of the bill. Instead, independent counsel are tasked with reviewing these cases.

“This [legislation represents] a bit of joy,” says Mayra, “for all the victims who wanted to be heard.”

More work to be done

While the NDAA marks a major reform, it doesn’t go as far as advocates had hoped. The set of crimes that will be pursued by independent counsel is narrower than what lawmakers like Senator Kirsten Gillibrand had advocated for. Commanding officers, rather than the independent counsel, will also retain the authority to convene courts martial and select the jury members.

Many lawmakers have credited Vanessa Guillen’s case for finally moving the needle on military justice. “The assault and murder of Spc. Vanessa Guillen was a tragedy that devastated our military community—but it also served as a wakeup call that serious changes needed to be made to protect our men and women in uniform,” said Sen. Joni Ernst, a Republican from Iowa in a statement to TIME. “Spc. Guillen’s family turned their loss into action, and have advocated relentlessly for improvements in the military’s handling of sexual assault and other serious crimes.”

Ernst added that more work needed to be done, and that she would continue to work with Senators Gillibrand and Chuck Grassley, a bipartisan pair that has advocated for a system overhaul since 2013, to pass the more expansive Military Justice Improvement and Increasing Prevention Act. Ernst had previously voted against moving sexual crimes out of the chain of command in 2015, but changed her position this year. She is the sole GOP woman who was formally a military officer and is also a survivor of sexual assault. Her support for the sexual misconduct measures included in the NDAA led to other Republicans voting in favor.

“The family of U.S. Army Specialist Vanessa Guillen deserves special recognition for their role in bringing about this transformative change,” said Sen. Jack Reed, a Democrat from Rhode Island, in a public statement. Democratic Rep. Sylvia Garcia, said in a public statement the bill is a step closer to protection for soldiers. “I thank the Guillen family for their tireless fight to get justice for Vanessa,” she added.

Still, regardless of her family’s legislative accomplishments, the Guillens still have many unanswered questions——including the identity of the man was who was sexually harassing Vanessa before her death, and whether he has been reprimanded. For Gloria, justice for Vanessa will not have been achieved until she knows every detail of what Vanessa went through and who was responsible. “I’m the kind of mother who won’t rest until I know what happened…I need to get to the truth, no matter what it is, I need to know.”

From her home in Houston, where the whole Guillen family lives together, Gloria recalls Vanessa as a child. She was a rambunctious and innocent “little piece of heaven,” Gloria tells TIME in Spanish. Vanessa was Gloria’s second child out of six. A portrait of her, in her military uniform, hangs on the wall behind Gloria’s shoulder.

Mayra and Vanessa come from a family of Mexican immigrants with a long history of military service, both in the U.S. and Mexico. From a young age, Vanessa expressed interest in joining the military like her forefathers. “It was probably in her blood to want to enlist,” says Gloria, adding that she never like the idea of her daughter in uniform. Gloria had “a bad feeling” about Vanessa enlisting, she recalls—a premonition that she now she chalks up to a mother’s intuition. She also just wished that Vanessa would stay home and start a family.

But that wasn’t Vanessa’s personality, her family recalls. She was active in soccer and enrolled in advanced classes at her high school. Vanessa and Mayra were very close, Mayra says. They shared a bedroom their entire lives. They would often stop for coffee together before classes and worked together at a flee market on weekends. “It was a lot of fun, a lot of laughter,” Mayra says.

Vanessa’s death has taken a physical toll on Gloria. She appears thinner during our Skype interview than when she first got up in front of cameras at the Fort Hood Army Base on June 23, 2020 where she delivered bone-chilling remarks threatening to tear down Fort Hood herself if her daughter was not returned to her alive. “She’s my life, that girl, she’s my life,” Gloria said in Spanish to a crowd of reporters. “That’s why I’m fighting with nails and teeth until they return her to me and the guilty pay.” One need not understand Spanish to grasp her rage and heartbreak.

Eighteen months after that speech, the grief is still raw. “I try to remember Vanessa as she was because pain makes one sick,” Gloria says. “So I remember her how she was—gorgeous, beautiful—and especially now I think of her with pride…She came to tear everything down, she came to be a hero with her story even though she was so young, so small.”

“I lost my little piece of heaven,” Gloria says, but adds that the passage of the NDAA at least lends her daughter’s death some purpose. “If my girl will save lives, I accept it.”

— With reporting by Abby Vesoulis