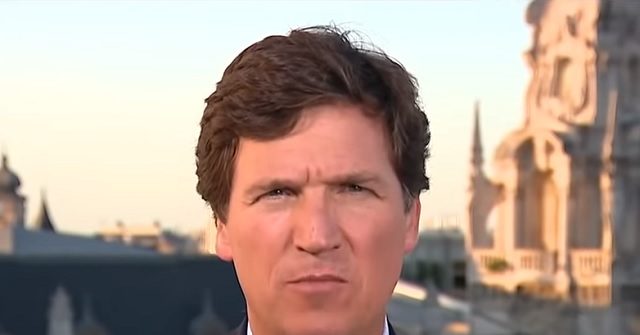 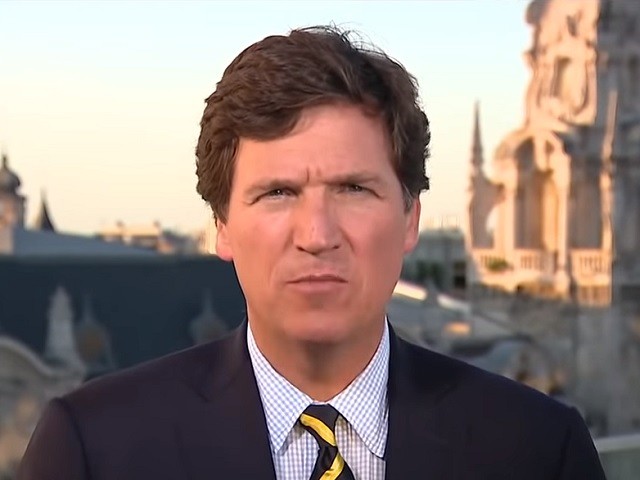 Carlson said the alarm from those within the United States was a direct contrast to what Ukrainian President Volodymyr Zelensky had been saying publicly and what he had reportedly told President Joe Biden.

However, Carlson noted those steadfast about the prospects of war in Eastern Europe.

CARLSON: If you’ve been following the news at all recently, you know, that Vladimir Putin is just seconds away for invading our ancient ally, our closest friend in the world stage, that would be the sovereign nation of Ukraine.

In response to this news, lovers of democracy everywhere are horrified. This is a slow-motion disaster. In effect, it’s the first domino.

First the Russians come from Ukraine. Next, it’s Bangor, Boise, Bakersfield. What Vladimir Putin plans next will make “Red Dawn” look like a documentary. So, of course defenders of democracy everywhere are horrified by this, and they’re ready to fight.

Now NATO whose job it apparently is to contain Russia has not yet committed to defending Ukraine for some reason. But patriotic Americans are not waiting for NATO. That’s not their way.

According to a piece in BuzzFeed, American citizens are joining the fight on their own. It’s their Spanish Civil War. They’re paying their way to Ukraine to defend the noble Ukrainian people against the dastardly Russian hordes on the frozen step.

But strangely, and this is weird, we have no confirmation tonight that David Frum, Max Boot, and Liz Cheney have left yet for Kyiv, and maybe they’re still oiling their rifles and gathering their kit, or maybe they’ve decided to man the cable news barricades, just because they’re technically behind the lines doesn’t make their service less perilous or important, and someday, they’re all going to get medals for the sacrifices they’re now making in CNN studios in New York City, and we plan to cover that ceremony live.

But in the meantime, Joe Biden seems most worried of all, Joe Biden is so panicked about what is about to happen to Ukraine, he makes Bill Kristol seem understated and restrained and it is not really surprising because Joe Biden is the President of the United States. He has got access to all the latest intel. It is delivered to him daily by the weapons of mass destruction division at CIA, those guys are on it.

This week, Biden got so concerned after reading what the CIA delivered him. He’s so worried about what’s about to happen to Ukraine that Joe Biden called the President of Ukraine to warn him about his fate. And then someone in the intel community leaked the transcript of that call to CNN, not for the first time. Here it is.

JAKE TAPPER, CNN ANCHOR: We are breaking news for you in our world, a senior Ukrainian official tell CNN that today’s phone call between President Biden and Ukrainian President Volodymyr Zelensky, quote, “Did not go well.”

Our sources tell CNN the two disagreed about the immediacy of the threat of a Russian attack on Ukraine. The White House and Pentagon had been emphatic that they believe an attack could be imminent. We should note the White House just released its own readout of that call. And there was no mention of President Biden’s warnings or the two Presidents disagreements?

CARLSON: Whoa, first, we should note that CNN is perfectly capable of taking spin filled propaganda calls from agents of the Ukrainian government, but you can’t talk to Russia because that’s treason.

But here’s the headline, it looks like there is daylight between the world’s two closest leaders, brothers really, and that suggests there might be a breach in the unbreakable bond forged over centuries between Ukraine and the United States.

Listen to this from CNN’s Natasha Bertrand, she did this reporting quote, “Per a senior Ukrainian official, Biden told President Zelensky that a Russian invasion of Ukraine is now virtually certain and that Kyiv could be sacked. Prepare for impact. Biden reportedly said. President Zelensky disagreed, and as I reported, asked him to tone down the rhetoric.”

What? Joe Biden is more worried about Russia than the President of Ukraine is? It looks that way because not long after that reporting, CNN’s Natasha Bertrand deleted that tweet.

Oh, and then an hour later, CNN’s Jim Sciutto contradicted CNN’s own previous reporting and tweeted out this White House statement which at CNN qualifies as reporting statement from the White House. Here’s what it said. “White House on Biden Zelensky call: Anonymous sources are leaking falsehoods. The only person who should be sacked is the anonymous source who is circulating an inaccurate portrayal of this conversation,” end quote.

Not an actual denial, therefore, it’s true. It’s an amazing sequence really, if you think about it.

So Biden tells the Ukrainian President that his capital city is about to be sacked, like Rome in the Fifth Century. Blood and screams, fire, spears, and swords, sieges and trebuchets, a horrible scene.

And Ukrainian leader’s response to this, calm down, dude, you’re freaking me out. Toughen up. You sound like a terrified old woman.

Now the White House claims that conversation never happened, but clearly it did happen because at a press conference today, President Zelensky said virtually the same thing to the media.

I’m not saying that they — he is influencing American media, the independent, but the media policy, there has to be verbal bans. If they want to know what the situation is that hey, they can come to Kyiv. Do we have tanks on the street? No.

The image that mass media creates is that we have troops on the roads, we have mobilization, people are leaving from places. That’s not the case, we don’t need this panic.

CARLSON: So David Frum and Joe Biden have gotten Americans so whipped into a frenzy over the future of Ukraine that they are flying to Ukraine to risk their lives in defense of that sacred nation’s sovereignty, and there is the President of Ukraine, saying we’re not that concerned.

So what can we infer from this? Well, it’s simple. If you’re not terrified about the prospect of a Russian invasion of Ukraine, the question is, whose side are you on here? Whose side are you on? And we know the answer that question. You’re on Vladimir Putin’s side.

So it looks like the President of Ukraine himself has been compromised by Russian misinformation. The Ukrainian President is what we on cable news refer to as an agent of Putin and that means the Russians are so diabolically effective they’ve recruited the guy they’re preparing the war against. How clever is that? It would take a Slavic mind to pull that off.

And by the way, yes, we are calling the President of Ukraine an agent of Putin, but we’re not judging him. In fact, we can relate, we can empathize. Because as you know, if you watch the media, we are agents are Putin, too.

BRIANNA KEILAR, CNN ANCHOR FOX’s chief propagandist, Tucker Carlson saying that the U.S. should be siding with Russia over Ukraine. What? You may say?

ANA CABRERA, CNN HOST: Members of Congress are actually getting phone calls encouraging them to side with Russia, because they’re watching right-wing media and people like Tucker Carlson.

DAVID JOLLY, MSNBC CONTRIBUTOR: When Tucker Carlson delivers this message, it is dangerous.

ARI MELBER, MSNBC HOST: Now, Tucker seems to have some sort of larger pattern here with tyrants who lean to the right.

NICOLLE WALLACE, MSNBC HOST: But why is he so committed? And why is FOX News on his behalf so committed to tearing down the American embrace and support and alignment with the world’s democracies?

MAX BOOT, CNN GLOBAL AFFAIRS ANALYST: Tucker is literally shameless. If he had any capacity to feel any shame, he should be embarrassed by what he just said, because he is basically repeating rank Russian propaganda.

CARLSON: Mr. Max Boot, ladies and gentlemen, in his final domestic television appearance before he heads to Ukraine to defend that nation himself, its territorial integrity from the aggression of Vladimir Putin. Watch him while you can.

But let’s be clear about what the terms are, in the United States, and this is not applied to Ukraine where they have probably more sane view of it, or maybe just more Russian influence view. But in the United States, if you raise any questions about the wisdom of siding in a war in Eastern Europe with one country over another, you are by definition, an agent of the single greatest threat to democracy on this globe, Mr. Vladimir Putin himself, your treasonous.

Congressman Tom Malinowski of New Jersey is claiming that viewers of this show, Russian robots, two men, reached out to his office and did something horrifying, something probably should be illegal. They said, maybe we shouldn’t go to war over Ukraine.

KEILAR: Can you just tell us about these phone calls that your office is getting?

REP. TOM MALINOWSKI (D-NJ): Yes, sure. It really started yesterday. I was in my district office in New Jersey and the phones were ringing and my district director came to me and said, I just spent an hour on the phone with like four people telling me that they’d watched Tucker Carlson last night, and why are we going to be going to war for Ukraine? Russia is making reasonable proposals for peace, and we should just do what Russia wants.

CARLSON: Yes. A lot of people have said Tom Malinowski, you know, is not the sharpest knife in the drawer, right? Even by the standards of New Jersey. However, he makes a really good point. There are people out there who look around and decide, maybe, I don’t know, homelessness, close to a million people living on the street in the United States, a hundred thousand Americans dying of drug ODs, inflation, the fact our schools haven’t taught anything in over two years, maybe these are more important concerns than the territorial integrity of a country we can’t find on a map.

They’ve obviously fallen for the Russian propaganda. That would be us, doing Vladimir Putin’s bidding. Like the President of Ukraine, we are guilty.