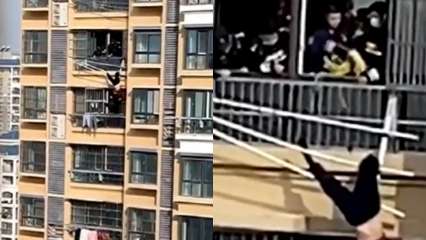 Internet is a place of fearful and scary videos, some even showing real-life events. We often see videos of spine-chilling road accidents and dangerous fires in residential areas, which often leave us nervous and full of anxiety.


In another such video, an elderly woman was seen hanging upside down from the railing of the 19th floor of a building. She was apparently seen hanging from the clothing rack which got stuck in the railing and ultimately prevented her from falling to her death.


The horrifying video of the elderly woman dangling from a height and nearing her death was uploaded to social media by the South China Morning Post. Reportedly, the harrowing incident took place in eastern China’s Jiangsu province.

An 82-year-old woman was seen dangling upside down from a clothes rack after falling from the 19th floor of a building in eastern China’s Jiangsu province. pic.twitter.com/Y4yvFRNBo8
— South China Morning Post (@SCMPNews) November 23, 2021

The woman was left dangling from the clothing rack lodged in the building’s railing from the 19th floor for some time before firefighters arrived on the scene and tried to save her life. The anxiety-fueled video shows firefighters carefully trying to untangle her and pull her up to safety.


The caption on the post uploaded by the news website reads, “An 82-year-old woman was seen dangling upside down from a clothes rack after falling from the 19th floor of a building in eastern China’s Jiangsu province.”

The old lady was ultimately saved by the firefighters who arrived on the scene as promptly as they could. The woman reportedly suffered no physical injuries due to the life-threatening incident. The lady was reportedly trying to dry off a quilt in her balcony when she slipped and fell off.


The video was uploaded on Twitter and went viral because of its horrifying nature, as netizens couldn’t look away from the scary scene in front of their eyes. The video has garnered thousands of views till now, with internet users expressing their shock over the incident.