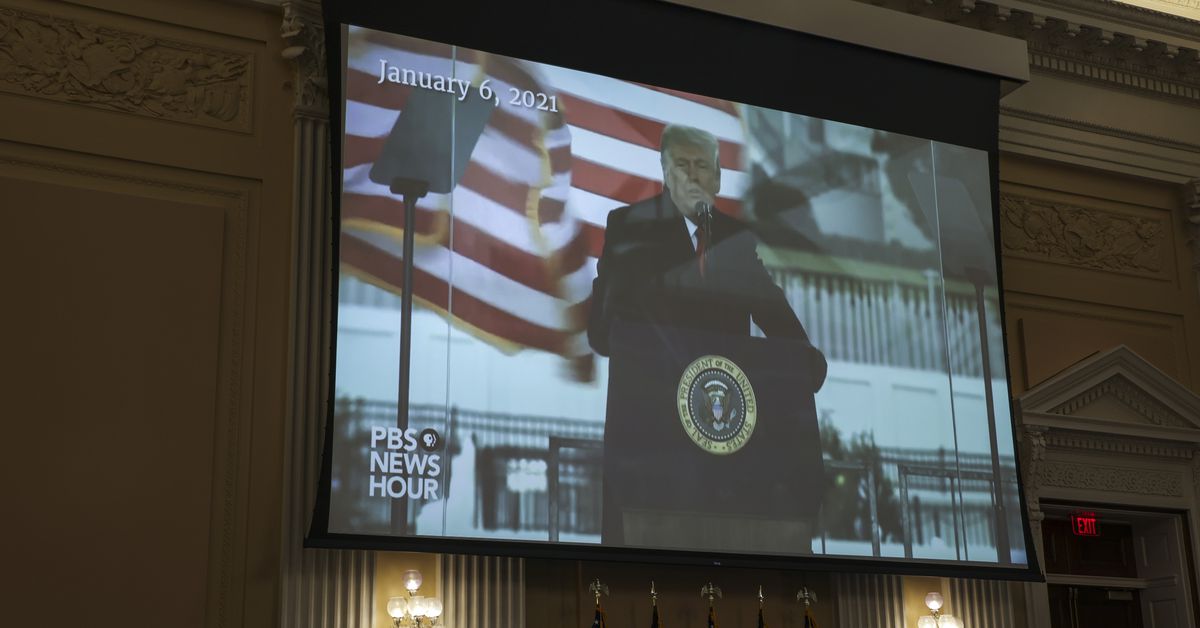 Donald Trump spent the final weeks before the January 6 attack on the Capitol careening recklessly between conspiracy theories and rebuffing anyone who tried to intervene.

In Thursday’s hearing of the January 6 Select Committee, Chair Bennie Thompson (D-MS) described Trump’s activities as “essentially a political coup.” And it almost was, but the effort the committee laid out seemed drawn out of some bizarre black comedy, with each detail more farcical than the last.

The hearing room occasionally broke out in laughter at the ineffectual attempts of Jeffrey Clark, a Justice Department official, to seize control of the department and overturn the election.

Clark linked up with Trump, going through Trump allies and around his own bosses, and became integral to their plot to overturn the election by appointing fake electors from swing states to replace the legitimate electors that were to be counted on January 6. Clark was willing to execute a plan no one in line to be attorney general would touch, and that put him in position to ascend to a job that was otherwise out of reach. That plot was the central focus of Thursday’s hearing.

Attendees snickered when acting Attorney General Jeffrey Rosen described his reaction when his then-subordinate Clark asked him to stay as his subordinate once Clark usurped him. “I didn’t accept that offer,” Rosen said.

“Did Mr. Clark ask you to continue to stay” at DoJ?

Rosen: “When he told me he would be replacing me… at least offer me that I could stay on as his deputy. I thought that was preposterous. Was nonsensical. No universe where I was going to do that. I didn’t accept that offer.” pic.twitter.com/JRDgbXgwVK

It felt more like a Friars Club roast than a congressional hearing at times, as top Republican lawyers repeatedly described mocking Clark’s efforts during the Oval Office meeting Rosen demanded once he got wind of Trump and Clark’s plans.

The committee showed footage of former White House counsel Eric Herschmann railing against Clark, describing his proposal as “asinine” and relating how he said of the environmental lawyer, “The best I can tell is the only thing you know about environmental and election challenges is they both start with E. And based on your answers tonight, I’m not even certain you know that.” Former acting Deputy Attorney General Richard Donoghue, who was testifying in person, described denigrating Clark’s legal experience directly to Trump. When Clark tried to respond, Donoghue sneered, “You’re an environmental lawyer. How about you go back to your office, and we’ll call you when there’s an oil spill?”

But before that meeting, Clark was on the brink of succeeding. The White House appears to have considered the deal done: It listed Clark on their call log as the acting attorney general before the meeting. Trump only backed off once the other Justice and White House officials there made clear to him that appointing Clark would turn the Justice Department into “a graveyard,” with mass resignations.

Steven Engel, the head of the Office of Legal Counsel, reinforced that it would be a public relations disaster from Trump in addition to all the other negative consequences from trying to overturn the election. “All anyone is going to think is that you went through two attorneys general in two weeks, until you found the environmental guy to sign this thing,” he said of the letter Clark wanted to send to swing states.

In providing a full account of Trump’s failed efforts, the committee showed an increasingly desperate man pursuing increasingly bizarre justifications for overturning the election. They revealed that acting Secretary of Defense Chris Miller personally investigated a conspiracy theory that Italian satellites being operated from the US embassy in Rome switched votes from Trump to Biden with the help of MI6 and the CIA. “Pure insanity,” Donoghue said of the video that was sent to him on the theory. Trump also asked the DOJ and the Homeland Security Department to seize voting machines based on another conspiracy theory.

Only hours after the decisive Oval Office meeting where Trump was talked out of appointing Clark to run the Justice Department, foiling one attempt at a coup, Trump called Donoghue again. This call was about a new claim that an Immigration and Customs Enforcement agent had found a truck full of shredded ballots from Georgia.

Former Attorney General Bill Barr had, in previously released deposition footage, compared Trump’s persistence in looking for new claims of election fraud to a game of “whack-a-mole.” We saw Thursday how badly that understated Trump’s dedication to finding some excuse to cling to power.

But if Trump was behaving recklessly, without any regard to law or historical precedent, we learned that some of the allies involved in supporting his plot saw a reason to be afraid of the consequences. The committee also shared footage of White House officials testifying that a number of members of Congress asked for pardons from Trump after January 6, including Reps. Andy Biggs (R-AZ), Mo Brooks (R-AL), Matt Gaetz (R-FL), Louie Gohmert (R-TX), Marjorie Taylor Greene (R-GA), and Scott Perry (R-PA). All had attended a White House meeting in late December to plan for the January 6 insurrection.

Witnesses told the Select Committee that Trump considered offering pardons to a wide range of individuals connected to the President. pic.twitter.com/LRJat3Algf

None of those members now say they were truly worried about what they had done. Gaetz pointed to a tweet describing the committee as “an unconstitutional political sideshow,” a spokesperson for Greene shared a tweet that characterized the committee as engaging in “gossip and lies” while a spokesperson for Brooks said in a statement: “There was a concern Democrats would abuse the judicial system by prosecuting and jailing Republicans who acted pursuant to their Constitutional or statutory duties.” In a statement, Perry said, “I stand by my statement that I never sought a Presidential pardon for myself or other Members of Congress.” Gohmert said in a statement, “I had and have nothing for which to seek a pardon and my requests were for others unassociated with government in Washington, DC.” Biggs denied he requested a pardon as well.

In his final days in office, Trump was handing out pardons “like Christmas gifts,” as Axios reported at the time, and even suggested that he might pardon “every person who ever talked to me.” He pardoned allies including former campaign manager Paul Manafort, former National Security Adviser Michael Flynn, former top White House aide Steve Bannon, and seven former Republican Congress members for a variety of prior offenses. But he did not pardon anyone connected with efforts to reverse the 2020 election.

During the hearing, Rep. Adam Kinzinger (R-IL) depicted the request for a pardon as a tacit admission of guilt. “The only reason, I know, to ask for a pardon is because you think you’ve committed a crime,” he said.

Thursday’s hearing, for all its unintentional comedy, did more than any of the previous ones to make clear how deadly serious Trump’s efforts to overturn the election were — and to show how little separated him from achieving that. Stalwart officials in Trump’s own administration headed off one plan to overturn the election on January 3. Of course, there was a more violent backup plan in the offing.

But the DOJ plot illustrated, as Kinzinger said at the beginning of Thursday’s hearing, “how close we came to losing it all.”