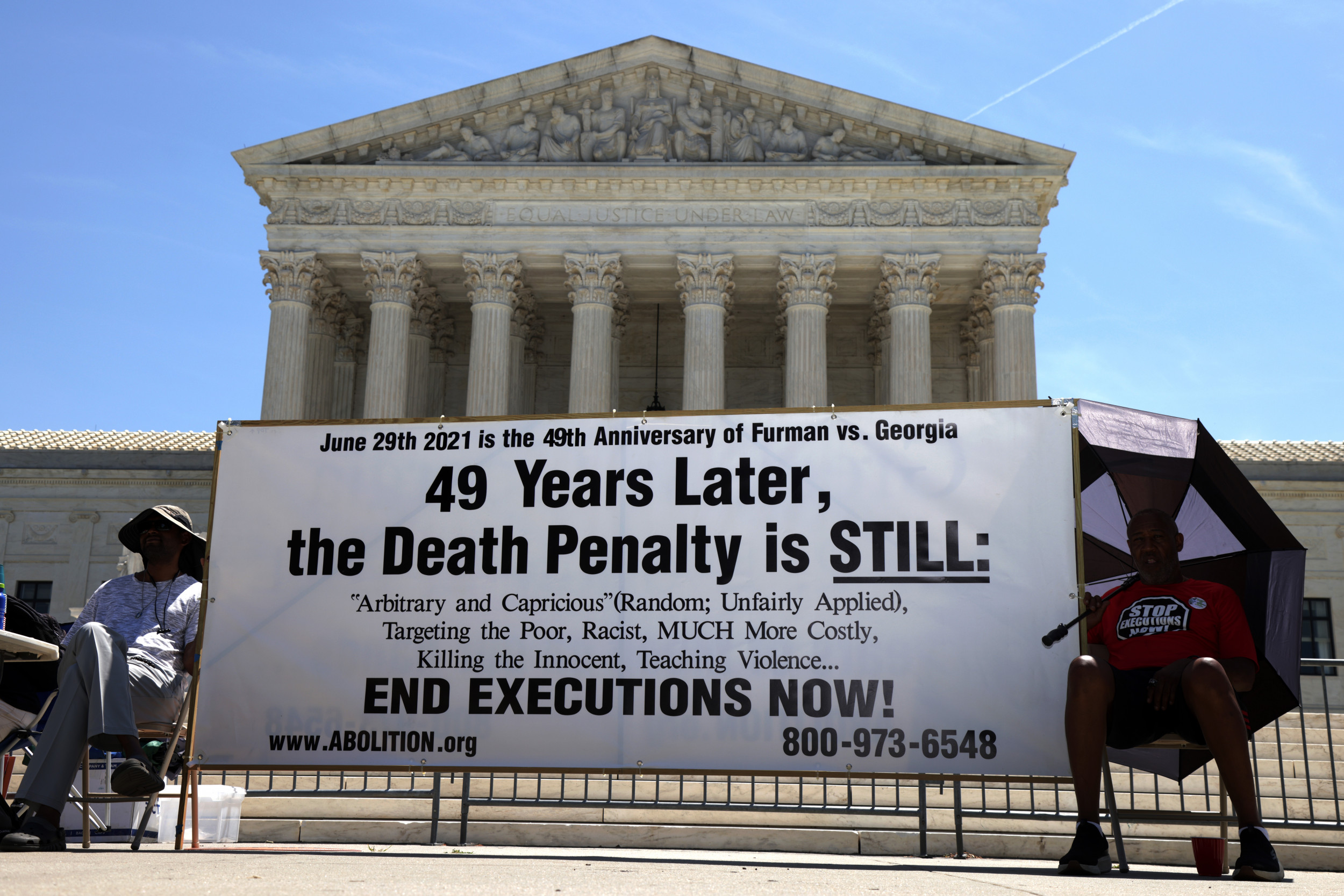 The Abolitionist Action Committee is set to gather in front of the U.S. Supreme Court in Washington, D.C., on Monday morning to highlight a petition addressed to all three branches of the federal government.

In a news release, organizers say some participants “may risk arrest to ensure their life-saving message is heard” during the rally, and later march to the U.S. Capitol and the Hart Senate Office Building.

“We are calling for immediate passage of the Federal Death Penalty Prohibition Act,” Rev. Sharon Risher, a board member of Death Penalty Action, said.

“We are calling on the Attorney General to stop seeking death in all federal cases and on President Biden to commute all federal death sentences and to order the demolition of the Death House at the federal prison in Terre Haute,” she added.

Risher lost her mother and other relatives in the Charleston church massacre in 2015, but opposes the death penalty for their killer, Dylann Roof, one of the most notorious inmates on federal death row.

She will join others pushing for the abolition of the death penalty at Monday’s protest, held outside the Supreme Court every five years on January 17 to mark the anniversary of the first execution in the modern era, when Gary Gilmore was executed by firing squad in 1977.

This year, it coincides with Martin Luther King Jr. Day.

King abhorred capital punishment, and was quoted in a 1957 article saying: “I do not think that God approves the death penalty for any crime—rape and murder included…. Capital punishment is against the better judgment of modern criminology, and, above all, against the highest expression of love in the nature of God.”

“It is especially important to me to be a part of this action on Martin Luther King Day because Rev. King’s family opposed the death penalty for the racist who murdered their loved one,” Risher added.

The protest has garnered the approval of Bernice King, the late civil rights leader’s youngest daughter. “I believe [the protest] honors both of my parents,” she tweeted earlier this month. “Most importantly, we need to abolish the death penalty.”

Biden, a death penalty opponent, had pledged on his campaign website that, as president, he would “work to pass legislation to eliminate the death penalty at the federal level, and incentivize states to follow the federal government’s example.”

Although Attorney General Merrick Garland paused federal executions, the Biden administration has “set no policy on the federal death penalty, allowing the Department of Justice to make decisions on capital prosecutions and appeals on a case-by-case basis,” said the Death Penalty Information Center’s year-end report.

Biden hasn’t said whether he would support the bill introduced by fellow Democrats to end the federal death penalty.

“We applaud President Biden for halting the Trump execution spree and for appointing an Attorney General who takes seriously this administration’s stated intention to abolish the federal death penalty, but it’s been a year and he needs to do more,” Abraham Bonowitz, the director of Death Penalty Action, a group against capital punishment, told Newsweek.

“When he demolishes the Death House in Terre Haute, the president will send a strong message to Congress that he’ll sign the Federal Death Penalty Prohibition Act when Congress puts it on his desk. And if Congress can’t act soon enough, the President must commute all current federal and military death sentences.”

In a video urging passage of the legislation, Durbin noted the 13 federal inmates executed in the final six months of President Donald Trump’s presidency “was more than the total number executed by the 11 preceding presidents over the previous 70 years,” and included some who were intellectually disabled.

“That’s a grave injustice that highlighted the basic immorality of the death penalty,” he said.

“Carrying out these executions during the pandemic needlessly endangered even more lives, and the Supreme Court’s conservative majority refused to ensure that legal challenges by individuals on death row received adequate consideration despite passionate dissents from several justices.

“It’s clear that we must work to completely eliminate the federal death penalty and prevent any future president from throwing the machinery of death into high gear.”