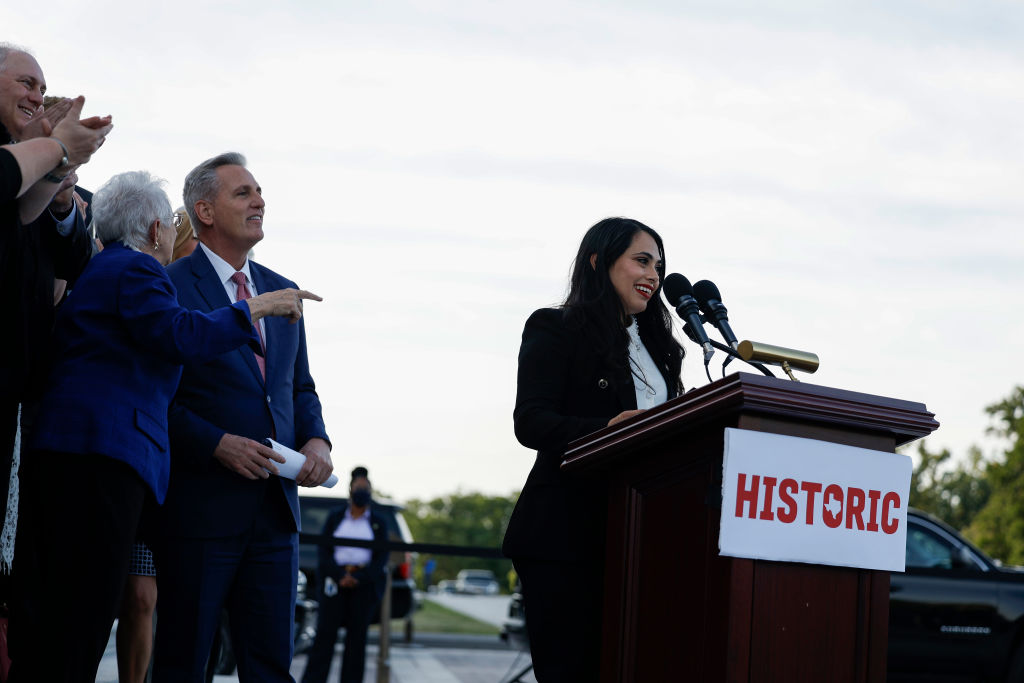 Elon Musk, the controversial CEO of Tesla and SpaceX ,who launched a high-profile bid to buy Twitter, fired off a tweet the night of June 15 as he continued his foray into backing Republicans and squaring off against Democrats.

Musk isn’t the only one paying attention to Flores, after the longshot candidate beat Democrat Dan Sanchez in the special election to fill Filemon Vela’s 34th Congressional District seat in Texas and become the first Mexican-born woman elected to Congress.

Republicans are downright giddy as well, sensing in Flores’ win the chance to remake South Texas politics, drawing traditionally Democratic-voting Hispanics to their side of the aisle.

But Flores has a tougher challenge ahead of her in November in the form of Representative Vicente Gonzalez, who switched districts from TX-15, where he has served since 2017, to run in TX-34, which leans more Democratic after Republican-led redistricting.

Reached for comment after a committee hearing, Gonzalez slammed Flores’ qualifications for the House seat she just won.

He called Flores an “unqualified opponent” who was “a pawn chosen by the Republican Party for a race they poured millions of dollars into for a seat that’s going to last six months.”

Flores did not respond to multiple calls or texts from Newsweek asking for comment as she was sworn in Tuesday.

But on Sunday, speaking of Latino voters, she told Maria Bartiromo on Fox News that Democrats “feel entitled to our vote, making the same promises over and over and really not making nothing happen.”

She cited inflation as the main issue facing Hispanics.

“The cost of living,” she said. “Everyone is extremely pissed off, angry at the Biden administration because of increase of gasoline, groceries, of medication. That is hurting them tremendously, not only here in South Texas but in the entire country.”

Texas Republicans and Flores allies say she should not be discounted, both due to how hard she works and changing fortunes for Republicans in South Texas.

“Everyone was behind her, the unity was helpful,” said Dave Carney, the general consultant for the Greg Abbott campaign, who is directing Hispanic strategy. “Two, she has an excellent story to tell, her own personal story and family story. And she worked her ass off knocking on doors, getting people to turn out. She’s a tireless campaigner who talked about the issues people care about.”

Abraham Enriquez, the founder of Bienvenido, and a Flores advisor, told Newsweek that Flores was one of the most active volunteers for his group, so when she decided to throw her hat in the race they went all in for her to the tune of 40,000 phone calls, 100,000 text messages, and voter registration primarily in the faith community.

Enriquez said November will be a different ballgame, but not in the way Democrats think.

“Mayra wont be running as a candidate, she’ll be running as an incumbent,” he said, which will represent an opportunity for her to show the hard work she put into her time in office. He also said Sanchez, whom she beat, described himself as a pro-life Catholic Democrat, and cast her new opponent Gonzalez as a “radical leftist” with a “radical socialist mindset.”

That would be news to Democrats, who describe Gonzalez as far from leftist, and also for the White House, which was subjected to comments from Gonzalez during the border surge at the beginning of the Biden presidency, in which he said the effects of Biden’s proposals would be “catastrophic for our country, for my region, for my district.”

Responding to the message that Republicans, including Flores, are pounding on the airwaves claiming to be the Party of “God, family, country,” Gonzalez said he supports those things as well, and sought to cast himself as the traditional Texan in the race, and Flores as an immigrant outsider.

“I believe in God, I’m a Catholic, I come from a patriotic family,” Gonzalez said. “I wasn’t born in Mexico, I was born in South Texas, the son of a Korean war veteran.”

In her most recent Facebook ad, released five days ago with 21,000 views so far, Flores said her family emigrated to the U.S. from Mexico when she was 6 years old “the legal way.”

In a previous ad, her cowboy hat-wearing father works on a car engine, while saying that as a father you want to do the best for your kids, which is why he moved his family from Burgos Tamaulipas, Mexico, when Mayra was a child.

Democrats say it’s not just that the 34th District went from one Biden won by 4 points in 2020 to one he would have won by 16 points, but that the electorate looks different in November than during a sleepy summer special election race.

Abel Prado, the executive director of the progressive organization Cambio Texas, told Newsweek that while the special election had less than 30,000 votes, the November race could see between 70,000 and 100,000 voters.

Still, there is no mistaking the loud bangs coming from Democrats who think their party’s strategy in the special election was flawed.

“The DCCC, DNC, and other associated national committees have failed at their single purpose of existence: winning elections,” Collin Steele, the campaign manager for Sanchez said in a statement. “The loss in TX34 was a complete and total abdication of duty. We gave up a reliably Democratic congressional seat for no reason at all; we deserve to know why.”

Chuck Rocha, a Democratic strategist working with the Democratic Senatorial Campaign Committee, said Republicans now have proof of concept on what happens when they outspend Democrats 10-to-1 as they did in Flores race.

He warned that winning more races in South Texas could open up the money spigot for good from Republican donors.

Gonzalez said he’s been told the Democratic Congressional Campaign Committee (DCCC) strategy was to let Republicans spend millions of dollars that they won’t be able to spend on other races — an approach he says is a mistake.

“I was upset with our party, I thought we could have made investment and won that race,” Gonzalez said. “I just think you need to win every election and every special election.”

“I have a difference of opinion on that regard,” he added.

An April DCCC research memo against Flores stated that she “openly affiliated” with the QAnon conspiracy theory, claimed the 2020 election was “stolen, illegitimate, and fraudulent,” and that Biden was a criminal.

It further stated she retweeted that Gonzalez’s 2020 win was fraudulent, retweeted claims of election fraud in Arizona, Georgia, and Michigan, and retweeted claims that Black Lives Matter and Antifa “set up” the January 6 rioters.

Prado said he doesn’t think “any of that stuff really matters,” and that it was simply a “calculated decision” from someone who never expected to actually win the seat.

But he said it underlines how much money Republicans spent to help her win.

But Gonzalez countered that Flores past statements and tweets will be “clearly” messaged to voters, before reflecting on her competence for the job.

“They’re going to know about it,” he said. “But it also sheds light on a candidate’s intellectual capabilities if they’re believing conspiracy theories like that, then maybe Capitol Hill is not a place for them to be hanging out at.”