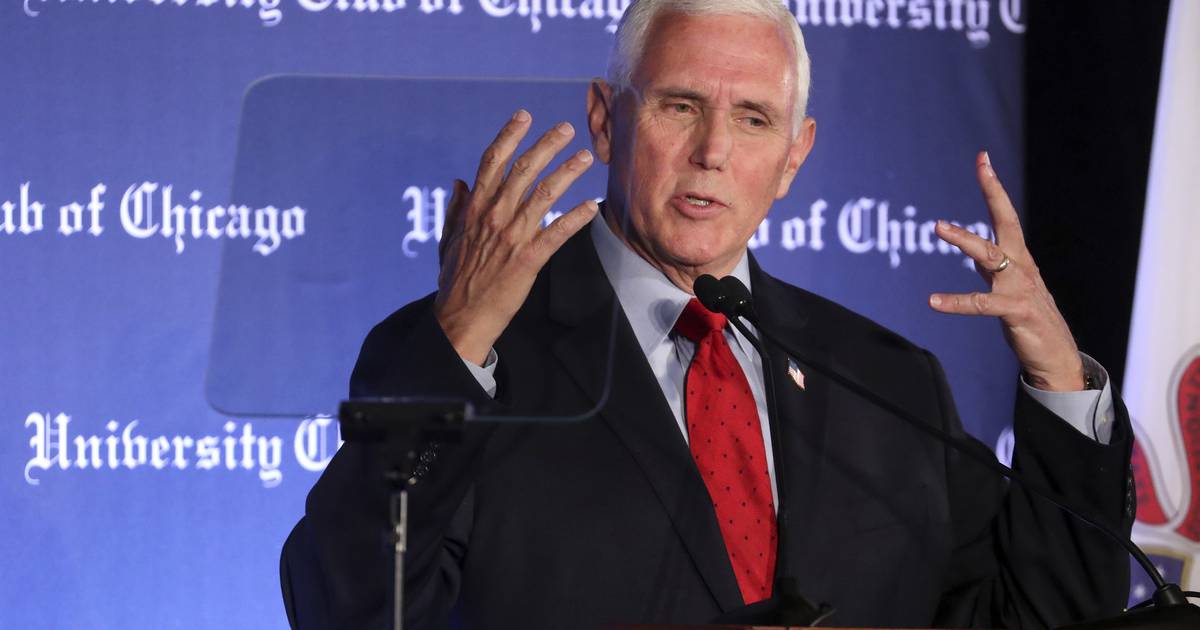 Sounding like a potential presidential candidate, former Vice President Mike Pence contended Monday that the nation’s economic woes were almost entirely the result of Democratic President Joe Biden’s policies, and told an audience at the University Club of Chicago that without a turnaround, Americans will “change leadership very soon.”

Speaking for nearly 40 minutes before a few hundred people in an ornate hall, Pence touted the economic successes of the “Trump-Pence administration,” but made no direct reference to the man he served under, former President Donald Trump.

Nor did he say anything about Trump’s efforts to pressure him to block the outcome of the 2020 election in the lead-up to the Jan. 6, 2021 insurrection at the Capitol, where rioters chanted “Hang Mike Pence.”

Pence has become a focal point of a House select committee’s investigation into the insurrection as the panel examines whether Trump knew his push for his vice president to stop the Electoral College vote count of states giving Biden the presidency was not legal. Pence refused to bow to Trump’s demands.

At the University Club, Pence made a lone reference to “a tragic day at our nation’s capitol” as part of a litany of difficult times the country has faced since the pandemic.

Pence, 63, did not discuss any ambitions for the White House. Such a bid could come up against Trump, who’s considering another run.

But the former vice president and former governor of Indiana lashed out at the polices of Biden and the “radical left extremists” in the Democratic Party and their “agenda of more taxes, more regulation, less American energy and open borders.”

“The truth is, the majority of Americans know that President Biden’s economic policies have failed utterly and completely and it is time for a change of direction for America,” Pence said. “The Biden administration squandered American prosperity faster than any other administration in the history of our country.”

“President Biden has offered plenty of excuses but few solutions,” he said.

“Gas prices are rising because of Joe Biden’s war on energy and it has to stop and stop today,” he said. “The runaway inflation is the predictable result of runaway spending. You cannot spend your way out of a problem that’s caused by overspending.”

Sign up for The Spin to get the top stories in politics delivered to your inbox weekday afternoons.

Pence offered up a traditional menu of conservative agenda items as an alternative, including opening up more domestic energy resources and action to “liberate the American people from oppressive taxation, tyrannical bureaucracy and the overregulation of the economy.”

“We have an opportunity to see without a filter the agenda of the American left, writ large, put into practice and we see a weakened America at home and abroad,” the former vice president said. “Unless this administration changes course and their allies in Congress change course dramatically, the American people are going to change leadership and change leadership very soon.”

Pence sprinkled his speech with quotations from the Bible as he also promoted family and faith as a bedrock for achieving “the American dream.”

“Strong families make for strong communities and strong communities make for a strong America. We have to have an economy that works for American families,” he said. “I believe the highest priority must be to preserve and strengthen families. It’s foundational for society today. At its very core, it’s family that’s made this country great.”

Pence also took a poke at Illinois, saying residents have seen the effects of high taxes and excessive business regulation.

“I have to tell you, as your neighbor to the east, after I was governor, I loved competing with Illinois for jobs,” he said.

“It broke my heart to hear Caterpillar and Boeing were moving out of Illinois. They’re moving to low-tax states,” he said of recent corporate departures from the Chicago area.

Pence was scheduled to speak at a Lincoln Day event in Peoria later Monday.