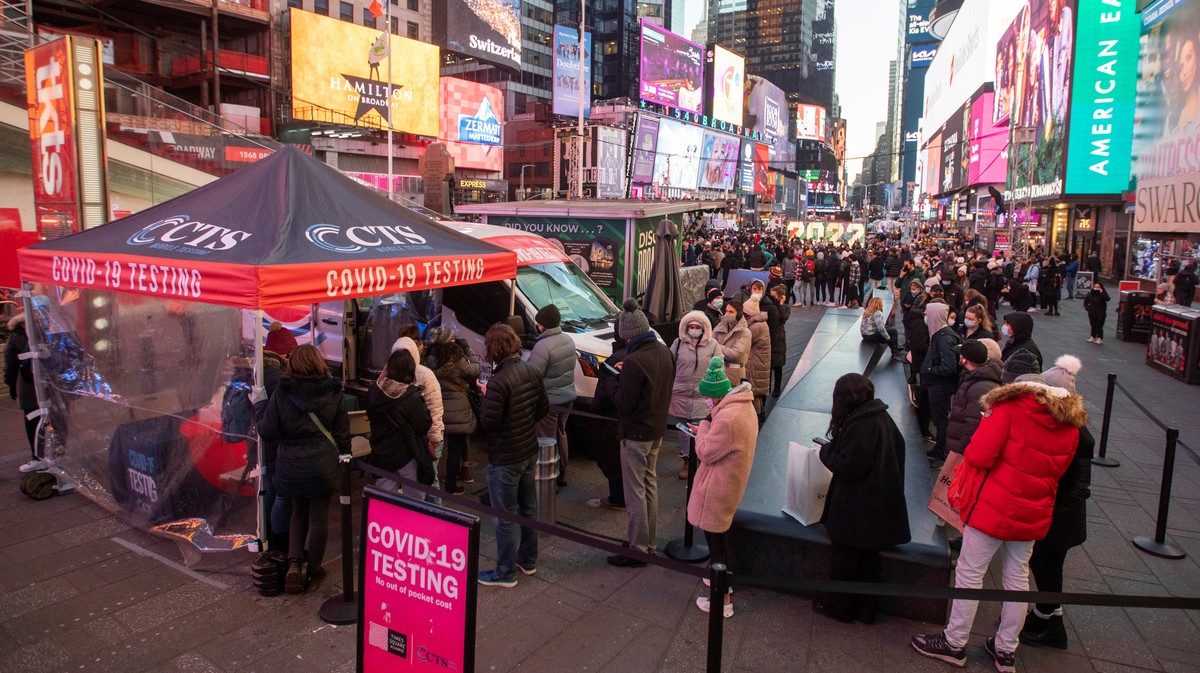 People wait in line for COVID-19 tests at a mobile testing site on Times Square in New York on Dec. 20, 2021. (Photo by Wang Ying / Xinhua via Getty Images)

Less than a month after South African doctors and researchers discovered the extremely transmissible Omicron variant, the variant now makes up more than 70 percent of COVID-19 cases across the United States.

Following months of the Delta variant dominating the COVID numbers in the U.S., Omicron accounted for nearly three-quarters of all cases that have been genomically sequenced as of Dec. 18, according to Centers for Disease Control and Prevention data. Two weeks prior, Omicron made up just 0.4 percent of all new cases, according to the CDC.

The variant’s spread is most visible in New York, where a Minnesota man was later confirmed to have the first U.S. Omicron case after he attended an anime convention in New York City. Cases there have risen 277 percent over the past two weeks, according to CDC statistics.

President Joe Biden will unveil his latest plan for tackling the pandemic in a Tuesday speech. The plan likely includes deploying troops and federal medical personnel to hospitals in January and February, as well as the administration buying 500 million at-home testing kits to be made available for free at the beginning of next month—an abrupt turnaround from earlier this month, when White House Press Secretary Jen Psaki dismissed distributing free at-home tests.

On Monday, a man in Harris Country, Texas, between the age of 50 and 60 died and became the first known death from Omicron in the U.S. He was previously infected with COVID-19 but was not vaccinated, according to the county.

The Houston Methodist hospital system said Monday that 82 percent of its cases were Omicron as of Dec. 15, just three weeks after the first infection was recorded.

In comparison, it took the Delta variant three months to top 80 percent of cases at Houston Methodist, the hospital said.

So far, in other countries with Omicron outbreaks, hospitalizations with Omicron are not increasing at the same rate that they did with other variants.

It’s not yet clear whether that’s due to vaccination and prior infection providing protection against serious illness or, as some research has suggested, the variant being inherently milder. Early studies, which have been released by Pfizer and Moderna and have not been peer-reviewed, have shown that a third booster shot of the mRNA vaccines produced by both companies boost antibody protection against Omicron.

So far, however, just 30 percent of the U.S.—or 60 million people—have received a booster shot, according to CDC data.

Either way, the sheer infectiousness of the variant is still threatening to put increased strain on hospitals following the holidays.

“Hospitals are in a really tough position right now,” Dr. Lisa Gralinski, an assistant professor of epidemiology at the University of North Carolina-Chapel Hill, told VICE News last week. “We’re not at our peak hospitalization numbers in a lot of the country…but doctors, nurses, all the medical staff that we rely on are burnt out.”