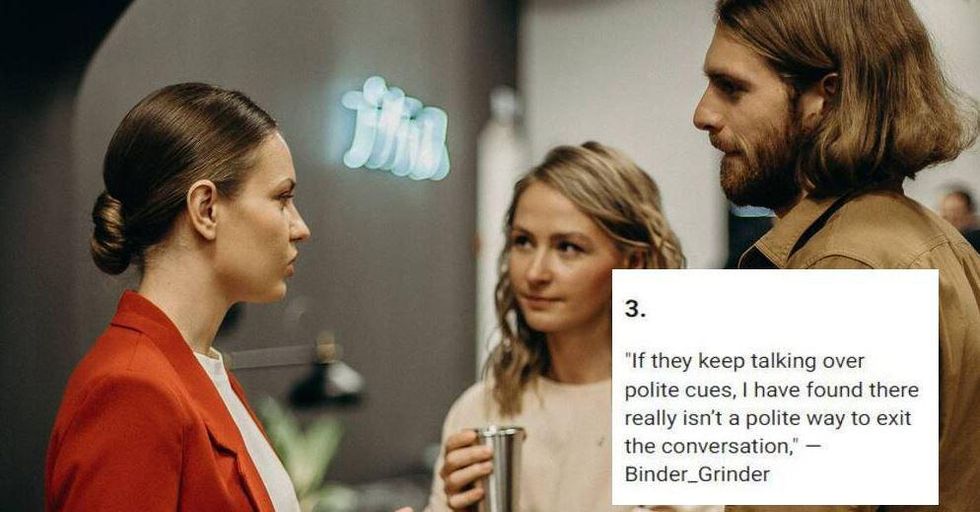 There are some people who live under the illusion that everything they say is deeply interesting and have no problem wasting your time by rambling on and on without a sign of stopping. They’re the relative, neighbor or co-worker who can’t take a hint that the conversation is over.

Of all these people, the co-worker who can’t stop talking may be the most challenging because you see them every day in a professional setting that requires politeness.

It may also be a case of someone who thinks they’re the most interesting person in the conversation.

For others, it’s a symptom of a disorder. Michelle C. Brooten-Brooks, a licensed marriage and family therapist, writes that excessive talking can also be a symptom of, among other things, attention deficit hyperactivity disorder or anxiety.

“Anxiety can cause someone to speak excessively,” Brooten-Brooks writes at Very Well Health. “While many with social anxiety may avoid social interactions, some may inadvertently talk excessively when in social situations out of nervousness and anxiety.”

So what do we do when we’re stuck in a situation where someone just keeps talking? A Reddit user by the name of Spritti33 asked for some advice about how to “politely end a conversation with a person who won’t stop talking” and received some very practical and funny responses from members of the online forum.

A lot of folks pointed out that it’s not impolite to walk away from a person who is incessantly talking because they are being rude by disrespecting your time. Others shared how, in some cultures, there are ways of shutting down a conversation while allowing both parties to save face.

Here are 19 of the best responses to Spritti33’s question, “How does someone politely end a conversation with a person who won’t stop talking?”

“In Flanders we have a word for it, ‘bon,’ and then you say something ‘I have work to do,’ ‘It’s time to go home,’ ‘It’s time to get drinks.’ And people realize the other person wants to leave without being mean,” — ISuckAtRacingGames

“In Ireland we do like a little clap/slap our thigh/clap the person’s shoulder and say ‘Right! Shur look, I’ll let you go…’ as if we’re being polite and letting the other person off the hook, but actually, it’s like get me the fuck out of here haha!” —funky_mugs

“If they keep talking over polite cues, I have found there really isn’t a polite way to exit the conversation,” — Binder_Grinder

“This is so true. People that do this don’t care whether you’re into the conversation or not, they’re talking simply because they want to. I’ve gotten better at just interjecting (even mid-sentence if I’ve already tried everything else) with, ‘I’m sorry, I have to go. (start walking away at this point) It was nice talking to you.’ Don’t give any excuses or reasons for leaving, just do it otherwise they’ll try to talk about your reasons.” — PSSaalamader

“As a teacher, I have learned how to interrupt people who do not leave any pauses when they’re speaking: start nodding and verbally agreeing with them, ‘Uh huh, uh huh, uh huh…’ You can’t interrupt these people, but you can start agreeing while they speak, then raise your voice and say, ‘Yeah, wow, excuse me but I must go,'” — Janicegirlbomb2

“Remember that it is them who is being impolite by talking incessantly about things of no interest to their audience,” — Orp4mmws99

“Source: am a therapist. What you do is recap their last story and in the same breath add a goodbye.

I.e. ‘Sounds like you guys found a bunch of great deals at the mall, that’s awesome! Thanks for meeting with me, you’ll have to tell me more next time we run into each other. It was great to catch up!'” — pikcles-for-fingers

“People who are like this expect folks to just walk away from them while they are talking because that’s the only way the conversation ends. It’s not rude to them, it’s normal. So, it’s entirely okay to say, ‘all right this has been great, see you later,’ and then just walk away smiling,” — Underlord_Fox

“If you can practice this, start to train one of your eyeballs to slowly drift off whilst the other eye remains locked on theirs. That should do the trick,” — The-Zesty-Man

“At 62, I just walk away. My bullshit filter has disappeared,” — Negative_Increase

“You gotta realize that everyone else they talk to just walks away. They’re used to that. They think a conversation is you just talk at someone til they walk away. It’s not weird to them,” — DelsmagicFishies

“I don’t know why some people are so afraid of this. It is not rude. You don’t need to lie. ‘We can speak more other time. Goodbye,’ is fine,” — Kooky-Housing3049

“On a more serious note, I typically do an ‘oh shit’ type of face like I’ve just remembered I had something important scheduled. I say ‘Sorry, what time is it? check the time Ah crap, I hate to cut you off but if I don’t head out now I’m going to be late for ____.’ Then I scurry away like I’m really in a rush. If you’re in a situation where you can’t straight up leave, I swap ‘gotta head out’ for ‘I told someone I’d call them at [time] and they’re waiting on my call’ and then make a fake phone call,” — teethfairie

“‘Wow, you have a lot of opinions about this subject…’ and then never stop angling the conversation back to how weird it is that they’re still talking,” — Ordsmed

“Had a friend who would put his hand gently on your shoulder and kindly say, ‘I love you , but I just don’t care, good (night/day),'” — Think-Passage-5522

“While not exactly polite, my Aunt Sophie had a great way of ending a conversation. When the monologue got too much she would nod her head like she was listening and then at the slightest pause she would go, ‘The end.’ And walk away.

​”Change your stance, instead of facing them head on turn 90° your body language will end the conversation quickly without being rude,” — Zedd2087

“Where possible, I’ve always found it best to tell these people up front that you have somewhere to be 15, 30, 45, etc minutes from now. If that’s not realistic, I’ve found that if you can usually find a gap to say you need to run if you focus on doing only this for 3-5 minutes,” — Pretend_Airline2811