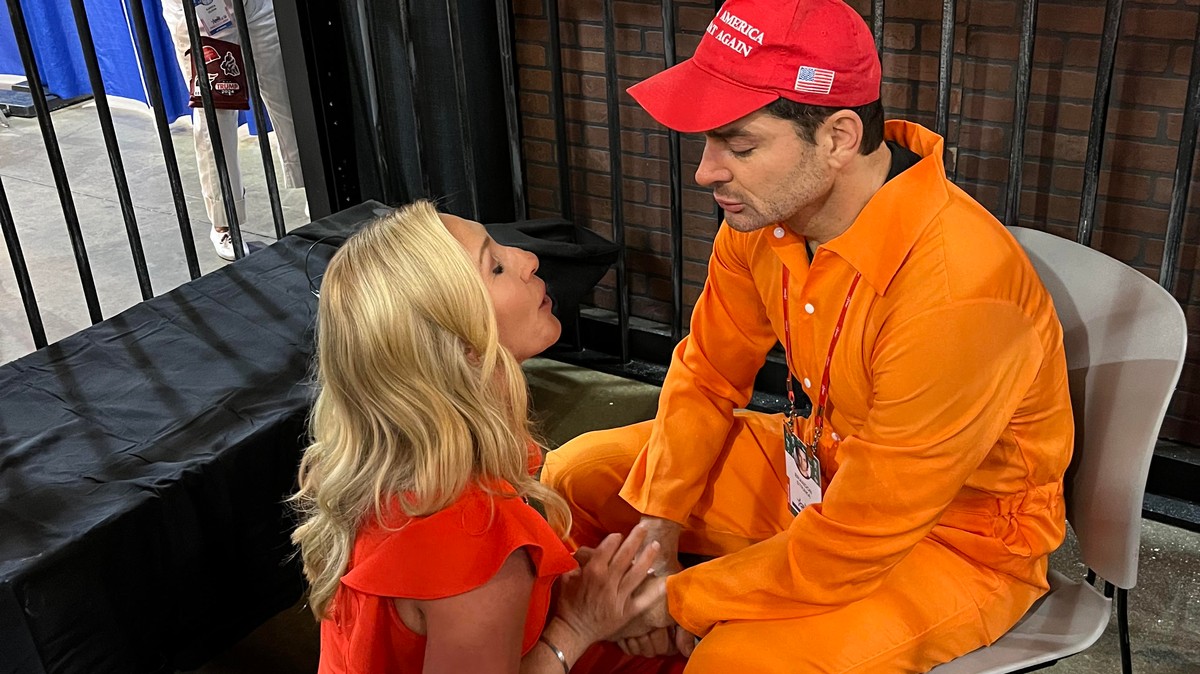 DALLAS – As dozens of onlookers looked on, some with tears in their eyes, a barefoot man in an orange jumpsuit and red MAGA cap sobbed in a cage in a convention center in Dallas, Texas.

Attendees at CPAC, the massive annual conservative activist conference, were given bluetooth headphones, emblazoned with the word “silence,” where they were invited to listen to audio accounts from January 6 defendants who have been jailed due to the Capitol riot.

Some spectators wept. Some threw money into the cage. Others came up close to mutter words of comfort and support to the emotionally distraught man inside, who was alternating sitting on a bare cot with his head in his hands, and writing sad slogans on a blackboard like “Where is Everyone?” Among those in the audience was Zuny Duarte, mother of Enrique Tarrio, the jailed ex-chairman of the Proud Boys facing seditious conspiracy charges for his role in the Capitol. One man, wearing a T-shirt saying “Correctional Officers for Trump 2020” pointed at his chest, making sure the “jailed” activist saw, and said “”I know how it works, man.”

During Thursday’s performance in the J6 cage, the man in the prison had been an actor. But on Friday, the man was none other than Brandon Straka, a self-proclaimed former liberal who founded #WalkAway, a social media campaign encouraging Democrats to ditch their party for the GOP. Straka was a vocal Stop the Steal proponent and activist, and landed in hot water with the feds when he filmed himself from the steps of the Capitol building on Jan. 6.

Straka, 45, pleaded guilty last fall to a single misdemeanor count of disorderly conduct, sentenced to 90 days of home detention, and got hit with a $5,000 fine plus three years probation. Mistakenly unsealed court documents revealed that he extensively cooperated with prosecutors and provided information to authorities about other Stop the Steal activists, including Ali Alexander, a leader in the movement. In short: Straka never did any real jail time, but that didn’t stop him from playing the part.

Despite all his rage, still just a J6 defendant in a cage. Photo by Tess Owen.

The line to see Straka in the cage stretched all the way to the back of the exhibit hall at the Hilton Anatole in Dallas. His performance came after he participated in a panel alongside Kash Patel, a former Department of Defense staffer whose text messages were wiped around Jan 6 (and now author of a children’s book about Trump), and Arizona Rep. Andy Biggs. In that Panel, Straka berated Biggs, along with the rest of the GOP, for not doing enough to help Jan. 6 defendants. Members of the audience became riled up, and started booing and heckling Biggs. (Biggs, in an apparent bid to improve his standing with the crowd, called to defund the Justice Department and FBI).

The surreal scene around the cage in the CPAC exhibit hall was only made more bizarre when security guards began parting the crowds for extreme-right Republican Rep. Marjorie Taylor Greene. The “jail guards” unlocked the cage and allowed her in. She hugged Straka, before falling to her knees in front of the chair he was sitting on. They clasped hands and prayed together.

The crowd outside the cage began reciting the Lord’s Prayer, and then the prayer to Saint Michael.

“Saint Michael the archangel, defend us in battle,” one man in the crowd chanted. “Be our protection against the wickedness and snares of the Devil.”

CPAC continues all-day Saturday, leading into the big event of the weekend, a speech from the king of MAGA himself, Donald Trump.