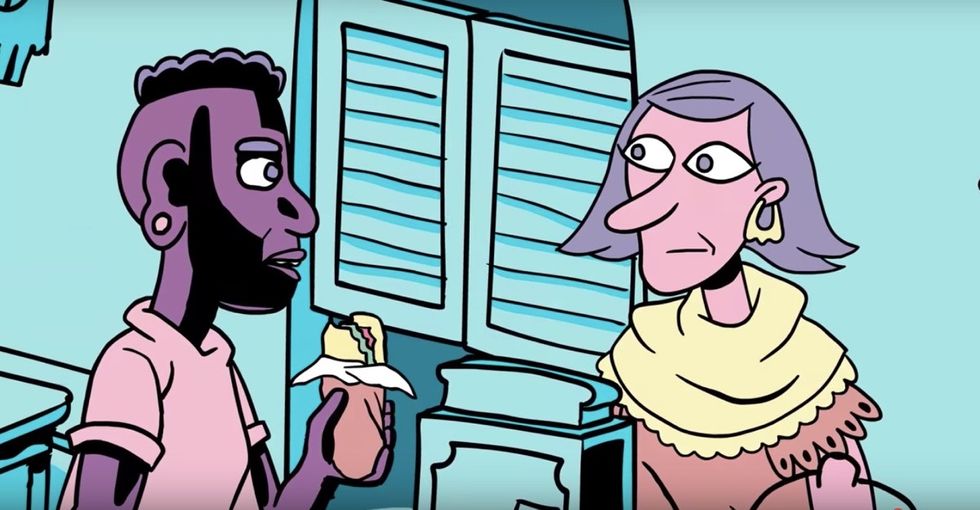 This article was originally published on January 30, 2018.

As such, I am a lot of people’s only black friend.

Being the only black friend is a gift and a curse. I am black and I love having friends. But I am also, at any given moment, expected to be a translator, an ambassador, a history teacher, and/or a walking, talking invitation into “I am not racist” territory. It’s a lot to handle. See what I mean about that curse? 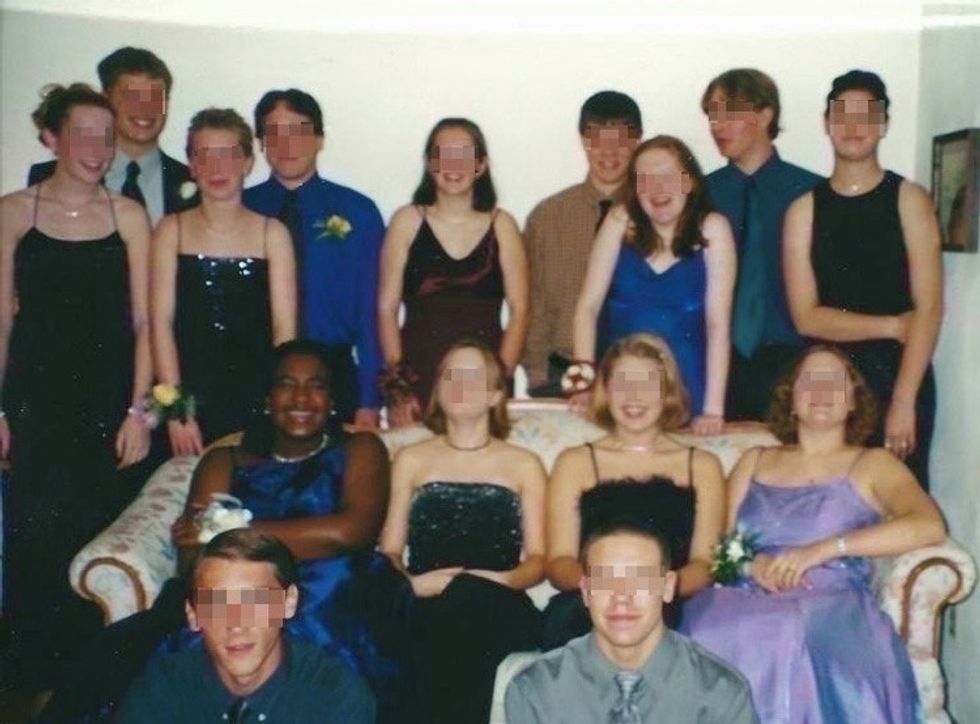 Don’t get me wrong, my friends are awesome, just very white. Here are me and a few of my pixelated pals before a high school dance in the early 2000s. Photo courtesy of the author.

So when I saw the animated short-film “Your Black Friend,” I felt so seen. Clearly, I am not alone.

The film, which was written, designed, and narrated by Ben Passmore and is based on his mini-comic of the same name, is a brilliant, refreshing way to examine whiteness and racism. The comic and animated short are an open-letter from “your black friend” to you, their well-meaning white friend, about bias, alienation, and what it means to be a good ally and friend.

It’s funny, honest, and heartbreaking in equal measure. And speaking from personal experience, it captures the experience of being a black friend to white people pretty much perfectly.

So if you’re a “woke” friend and ally, here are some things your black friend wants you to know.

1. You’re going to have to get uncomfortable.

It’s not easy to confront strangers or people you love, but if you don’t do it, you are part of the problem. Sitting out isn’t an option. No one said being an ally is easy.

2. “Your black friend would like to say something to the racist lady, but doesn’t want to appear to be that ‘angry black man.'”

“He knows this type of person expects that from him, and he will lose before he begins,” Passmore says.

Black people can’t always react or respond the way we want to. When I am followed in a department store, pulled over for no reason, or stared at while picking up dinner at the fancy grocery store, I can’t stop what I’m doing and yell, “YES, I AM BLACK. NO, I AM NOT A CRIMINAL YOU SMALL-MINDED, BIASED ASSHOLES.” Trust me, I want to. But especially when police are involved, I have to be calm, respectful, and obedient.

That’s where you come in. You, white friend, need to speak up and say something when I can’t. If you are not at risk, nor considered a threat, you have a certain amount of privilege in these situations. Use it to demand answers, speak to supervisors, or if things really get dicey, pull out your phone and hit record.

3. We are constantly monitoring our surroundings and adjusting our clothes, hair, speed, and speech to maintain white comfort.

We don’t like it, but one small choice — like deciding whether or not to wear a hood, or the speed at which we reach into our glove box — can be the difference between life and death.

When I am in a parking garage and walking behind a white woman, I intentionally cough or walk a little louder so she turns and notices me.

Why? Because when I don’t, that same white woman will often clutch her purse and occasionally let out an audible gasp as I pass her. This is something my white friends likely don’t realize I have to do. Some of them may even be the pearl-clutchers in the parking lot.

But to maintain white comfort and to avoid having the cops called on us, we often have to tamp down clothes, modify our speech and volume, even do our hair differently. We have to have “the talk” with our kids about how the world sees them, and how act in order to make sure they come home alive.

No, it’s not fair. No, we don’t like it. But so long as this country and its institutions are built on a solid foundation of white supremacy, it’s a grim reality. You need to know that, and take it up with your fellow white people about how to dismantle it.

“Lemonade” was awesome. There is no denying it. And yes, I love seeing her iconic looks on Instagram too. But there is more to black music and black art than Beyoncé. Dip a toe outside your comfort zone and try new new artists and genres you may not be familiar with. Go listen, see it, and experience it for yourself.

And while we’re here, you can’t say the n-word when you sing along. Nope. You just can’t.

5. Speaking of which, performative blackness is really uncomfortable.

When you wear that braided wig on Halloween, or use your “blaccent” when you’re around me or other black people, it hurts. It’s not cute or charming, and it definitely doesn’t make you seem cool.

Our culture and heritage are not costumes you can slide on and off at your convenience. We don’t get to be black only when it suits us. Neither do you.

6. “Your black friend feels like a man without a country.”

Having white friends and seeming to “fit in” with the majority can feel really alienating. You can feel too “white” for black people, and too “black” for white people when all you want to do is find people to eat pizza with. As Passmore wrote, “He is lost in this contradiction, and held responsible for it.”

7. We would love it if we could stop talking about our anxiety and frustrations regarding racism. But right now, that’s impossible.

Our concerns are urgent and real. We’re getting subpar health care. We’re disenfranchised. We’re over-policed. We’re thrown in jail. We’re killed by people sworn to protect us. It’s exhausting, but we have to keep talking about it. So do you.

We can’t be expected to dismantle white supremacy on our own.

Our white friends and allies need to step up and gather their people. Have the tough conversations. Speak up when you see racism, discrimination, and microaggressions. The time to talk about it is done. Be about it, or find yourself a new black friend.