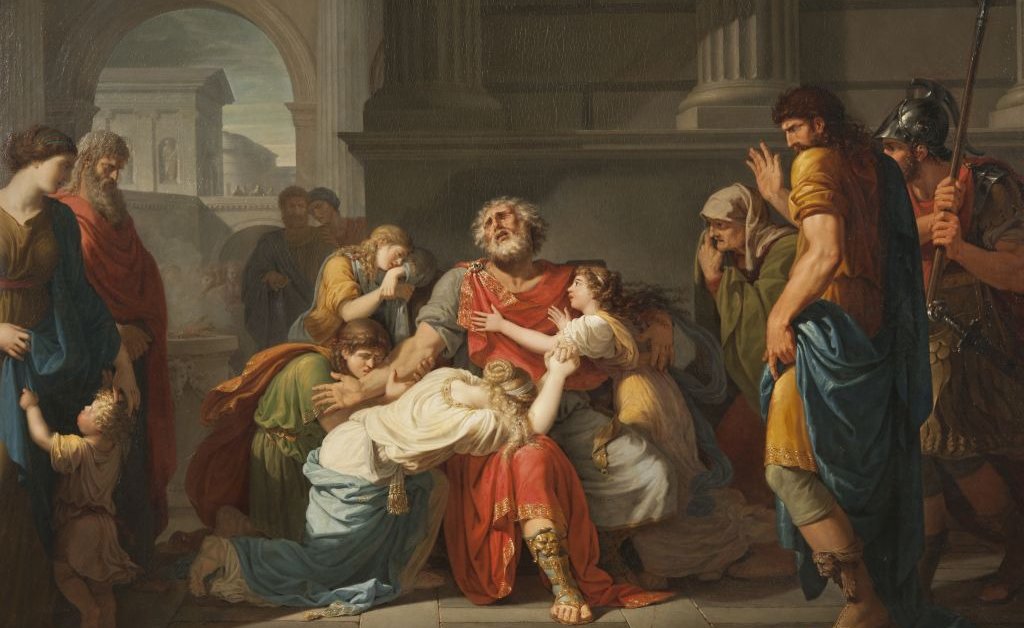 In late 2020, towards the end of my work on my compendium of Greek myths, I was editing my version of the story of Phaethon. The source is Ovid’s famous epic poem about transformations, Metamorphoses. Phaethon is the son of the sun-god Helios, who drives his blazing chariot across the sky every day. But Phaethon has never met his father. Instead, he lives with his mother in obscurity, and his friends are scornful of his claim to be a god’s son. Eventually, Phaethon goes in search of Helios, who, when they at last meet, promises the boy a gift—anything he wants. “I want to drive your chariot across the sky, just for one day,” says Phaethon. Helios is horrified, and tries to persuade Phaethon to take the request back in vain.
[time-brightcove not-tgx=”true”]

It is a disaster, of course. A mere boy, he has no chance of controlling the sun-god’s horses. The chariot veers wildly towards the Earth. Crops blacken, rivers dry up, mountains burn, people go hungry. In the end, it is Gaia—the age-old goddess of the Earth herself—who, parched and weary, calls out in distress. The king of the gods, Zeus, hears her, and sends a thunderbolt to kill the boy and arrest his journey.

At the time, I didn’t have to strain to imagine what the poet was describing: all I had to do was to look at news reports from California, where the sky was stained orange and black with the flames and smoke of wildfires.

The particular quality of myths is their ability to send us signals from an unfathomably deep past. But these signals are there to be read in our present, in our moment; and every moment’s reading is different. The Phaethon story has long been read as a fable about youthful arrogance and folly. When I first read it, many years ago, I interpreted it as about a son who is desperate for an absent father’s love. More recently, though, it’s seemed to me inescapably obvious that it asks to be read through an ecological lens: as about a human who is so caught up in his own petty desires that he’s blind to the appalling environmental damage he’s causing. The tragedy of the story, as I rewrite it in my mind now, is that Phaethon’s desperation, his sense of loss and injustice, is so very comprehensible, so intensely human. But he is trapped in the smallness of his purview. And it’s that inability to see more widely, to understand consequences, that is so horrifying

“History is always then, myth is now,” wrote the novelist Pat Barker recently. The work of historiography is to locate events in time, in all their contingent specificity. Myths, on the other hand, are unstable, inherently contaminated, existing precisely in order to be reread, rewritten and reinterpreted. There are no canonical versions of the Greek myths. The stories of the Homeric poems the Iliad and Odyssey, for example, are by their nature impure, composites, traces of multiple stories told and retold by travelling rhapsodes who sang them and adapted them to their audiences in archaic Greece, long before versions of them were captured and pinned down in writing. That’s true of all classical myths. There’s no “right” version of any of them. There’s the Medea who kills her children (thanks to Euripides’ play). But there’s another Medea who doesn’t kill her children (thanks to a number of other tragedies that survive only in fragments). There’s the Helen who goes to Troy (thanks to Homer). But there’s another Helen who doesn’t go to Troy (thanks to Euripides). The stories contradict each other wildly. But they are all Greek myths.

Those fifth-century BCE dramatists of Athens—Aeschylus, Sophocles and Euripides—used mythical material, often radical expansions of moments or scenes in Homer’s epics, to address the politics of their own time. When we restage these plays —and in the early 21st century, we never seem of tiring of doing so—we’re undertaking something similar, albeit at an extra remove. That is, we’re using the lens of Euripides’ take on unimaginably distant stories of long ago to help us understand our present. The context may have changed beyond all recognition: we’re not staging these plays as part of a religious festival devoted to Dionysus in the blazing Athenian sunshine to an audience largely consisting of men, for instance. But we can still see in these dramas something useful and telling about, say, the moral compromises made when nations go to war (Euripides’ Iphigenia in Aulis); the horrific “collateral damage” visited upon non-combatants (Euripides’ Hecuba); the harm and violence that can travel through the generations when family members turn on each other (Aeschylus’ Oresteia).

What might Greek mythology have to tell us about the largest crisis looming in our own time: the COVID-19 pandemic? Last summer—during a brief respite from spikes of COVID-19, when theatres could open—the National Theatre in London staged a delayed production of Sophocles’ Philoctetes, freely adapted by poet Kae Tempest (who retitled the drama Paradise).

Philoctetes is a drama not often put on in the U.K., perhaps because of its rather peculiar story. The eponymous lead character is an archer. Owing to a badly injured leg, the stench of which disgusts his fellow Greek soldiers, he has been left on the island of Lemnos while his erstwhile comrades lay siege to Troy. Except, a decade after this rather brutal abandonment, the Greeks realise they need their ex-comrade after all: a prophecy has told them that his bow is required for Troy to be taken. So two soldiers, Odysseus and Neoptolemus, set off to persuade Philoctetes to return with them to Troy. The problem is, he doesn’t want to come.

It’s a play that has a lot to say about moral injury, about the corrosion of a sense of right or wrong under the influence of conflict. But in this moment of the pandemic, what radiated from it as I watched it this summer—even though it had been adapted and conceived and even rehearsed before the pandemic began—was what it had to say about deep physical distress and about the costs of isolation. Perhaps most pointedly, it also seemed to offer a warning that returning to “normality” is not quite as easy as it looks.

Political leadership is, of course, something else that has been thrown into sharp relief during the pandemic. Presidents and prime ministers have been tested against COVID-19, and some found wanting. Epidemics—or, rather, in poetic parlance, “plagues”—set up the conditions for two important mythical stories: Homer’s Iliad, and Sophocles’ Oedipus Tyrannos.

In the very first lines of the Iliad, the poet asks, rhetorically: What caused the hero Achilles’ wrath? The answer comes: it was the god Apollo, who sent a disease to kill Greek troops. Why? It was in response to a prayer from one of his priests, whose daughter had been seized and enslaved by Agamemnon, the Greeks’ leader. Agamemnon eventually agrees to return the woman, but he’ll grab Achilles’ enslaved captive, Briseis, in compensation, enraging Achilles and prompting his prolonged sulk in his tent.

Attempting to discover the cause of an epidemic is also what sets the action going in Oedipus Tyrannos. At the start of the play, a delegation of citizens begs King Oedipus of Thebes to do something about the awful disease that’s raging through the city. Oedipus promises to discover the cause, and it’s this investigation that becomes the action of the play, ending up with Oedipus’s dreadful discovery—or diagnosis—that he unknowingly married his mother and killed his father. Oedipus himself is, it turns out, the miasma, the source of the corruption, the cause of the plague.

I would like to think that most of us no longer believe that epidemics are divine punishment for some kind of moral stain or unspeakable sin (though of course, there were plenty of people who tried to claim exactly that during the Aids epidemic in the 1980s and 1990s). What is interesting about these mythical epidemics, in relation to our present is what they reveal about the characters of the political leaders, Agamemnon and Oedipus. Agamemnon behaves with arrogance and unbending pettiness, losing the confidence of his best fighter, Achilles, as a result, and sending the Greeks on a course towards military disaster. Oedipus, with all of his quickness and cleverness, does indeed discover the cause of the epidemic in real time over the course of the drama. But even as he responds to his desperate subjects in those first moments of the play, his high-handed self-assurance and over-confidence is palpable. He is so clever. And yet, he is so blind to what is really there. For each of these famous mythological leaders, handling the epidemic turns out to be utterly revealing of who he is.