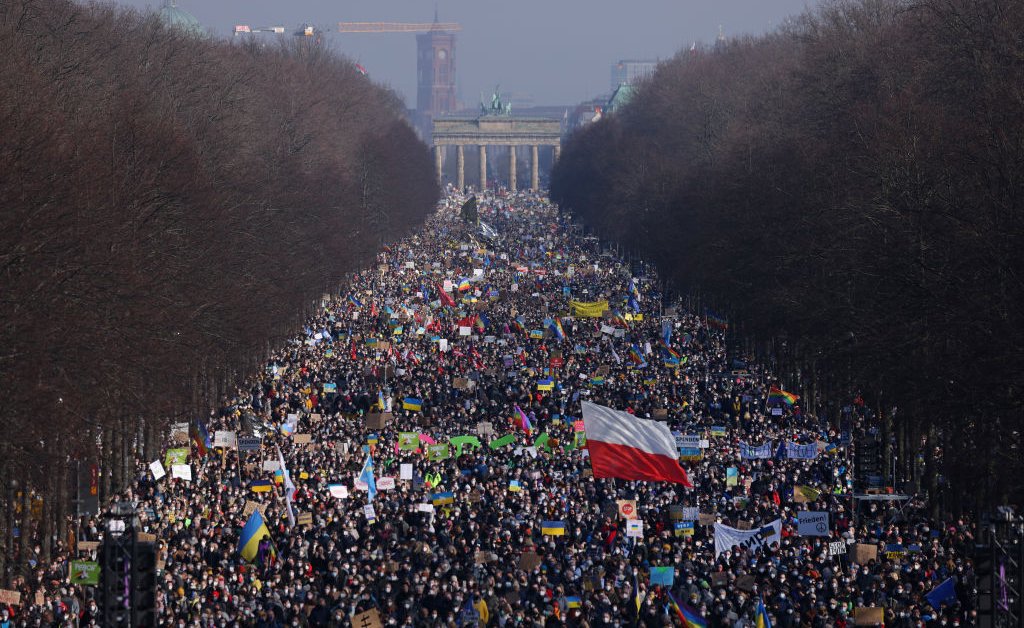 Wenden is a perfectly ordinary German word. You can use it to say you want to flip a pancake, turn to a friend, tighten a screw, round a corner, consult an authority, or appeal to the public. But when Germans say die Wende, they mean only one thing: the collapse of the Soviet Union, including the fall of the Berlin Wall and the reunification of Germany. Chancellor Olaf Scholz could hardly have chosen a more heavily laden word to describe the changes wrought by the Russian invasion of Ukraine than Zeitenwende. For Germans, the idea that the events of the last week constitute a Wende necessarily implies a reversal of the wave of democratization and commercialization that swept across Europe in the late 80s and early 90s.
[time-brightcove not-tgx=”true”]

Scholz needed a big word to justify the big spending package he was announcing—a 100 billion Euro one-time subsidy intended to bring the German military up to speed, followed by a proposed increase of military funding to amount to 2% of Germany’s gross domestic product by 2024. The spending represents a new era for the Bundeswehr, which has been kept deliberately small since the Second World War. The news—which sent the stocks of defense contractors sky-rocketing—fundamentally changes the nature of the German military. “My goal, our goal is to have one of the most powerful militaries in Europe,” Finance Minister Christian Lindner told the ARD Morgenmagazin. According to reporting by Die Welt, the Bundeswehr will replace the outdated Tornado strike aircraft, potentially with American F-35s, while continuing to develop the costly Eurofighter. They’ll be new transport helicopters to replace the aging CH-53s, most likely American Chinooks or CH-53Ks. Germany’s Puma tanks will likely be retrofitted in advance of the deployment of a “supertank,” and the navy will build two new submarines in a joint venture with Norway.

The Greens, like the SPD have traditionally been an antiwar party, and though there does seem to be a widespread feeling among members of both parties that an increase in the military budget is necessary in the current political crisis, the secretive manner of Scholz’s announcement has begun drawing increasing criticism. Jessica Rosenthal, a member of the Bundestag and the leader of the SPD’s youth organization complained that she was “very surprised” by the scope of Scholz’s “reversal of course.” It wasn’t only Rosenthal who was left out of deliberations regarding Scholz’s reversal of more then 70 years of German military policy. Instead the decision was, according to reporting by the Süddeutsche Zeitung, kept almost entirely secret it appears, at least, that Scholz did not consult with anyone from the Green party, nor did he discuss his plans with Interior Minister Nancy Faeser, Defense Minister Christine Lambrecht, or Rolf Mützenich, the parliamentary leader of the SPD. Instead, he seems to have consulted extensively only with Christian Lindner the Finance Minister and head of the FDP, a minority party in the current administration.

Read More: How Zelensky Galvanized Ukraine and the World

But even as the military’s procurement officers plan their purchases, public criticism of Scholz’s defense spending proposal grows louder. While few commentators doubt that increasing military expenditures is necessary given Putin’s aggression in Ukraine, Scholz is coming under increasing criticism for the secretive and arguably undemocratic nature of his decision, with some members of the powerful parliamentary Green fraction going so far as to call the legitimacy of Scholz’s announcement into question. “We’ve made it clear that decisions about the budget are finally a parliamentary matter,” said Foreign Minister Annalena Baerbock at a press conference, while Ricarda Lang, co-chair of the party said that “everything is still up for discussion,” according to the TAZ, a left-leaning daily based in Berlin. Indeed, even the generally more bellicose CDU has insisted that they, “won’t sign any blank checks” for the Bundeswehr,” as Bundestag member Thorsten Frei told RND.

It’s hard to understand why Scholz would be so secretive or why he would attempt to initiate skirt public debate in initiating such an enormous change to Germany’s defense policy. The additional funding is unlikely to play any direct role in responding to Russian aggression in Ukraine. The Eurofighter, submarines, and supertanks that will eat up a large percentage of Scholz’s proposed special subsidy are all still years if not decades away from being ready for service. Nor can the funds be used to increase the Bundeswehr’s manpower in time to serve as an effective deterrent in the war in Ukraine. “If society again determines that we need to be able to mobilize our armed forces, there will have to be a debate,” a spokesperson from the Ministry of Defense told me via email, “…it would take many years of preparation.”

Read More: Could Protests Against the War in Ukraine Be Putin’s Undoing

Even beyond concerns about the secrecy with which Scholz planned the reversal of German military policy, there are substantial doubts as to the German military establishment’s ability to spend the money effectively. “France’s defense budget is about the same size as ours,” Jessica Rosenthal told the Süddeutsche, “but our military can’t make do with the money. That leads me to the conclusion that we use the money inefficiently.” Similar complaints have begun to echo throughout the German media. “Israel manages with less than half” of Germany’s budget, the TAZ complained, “and no one thinks they’re poorly equipped.” Critics of the German military’s procurement system can point to a long history of scandals, including, for example, the 135 million Euros the military spent repairing the Gorch Fock, a sailboat used for training purposes and the so-called “consultant affair” in which Germany’s defense establishment paid millions to McKinsey consultants, leading to accusations of corruption and incompetence, as well as Ursula von der Leyen’s resignation as Secretary of Defense.

It seems clear that the German military will play an increased role—and demand increased funding—as the world struggles to grapple with the consequences of Putin’s bellicosity, but the German military has given outside observers little reason for confidence in its ability to manage large sums of money, and Scholz’s secrecy gives critics good reasons to doubt the transparency and democratic impulses of his government.