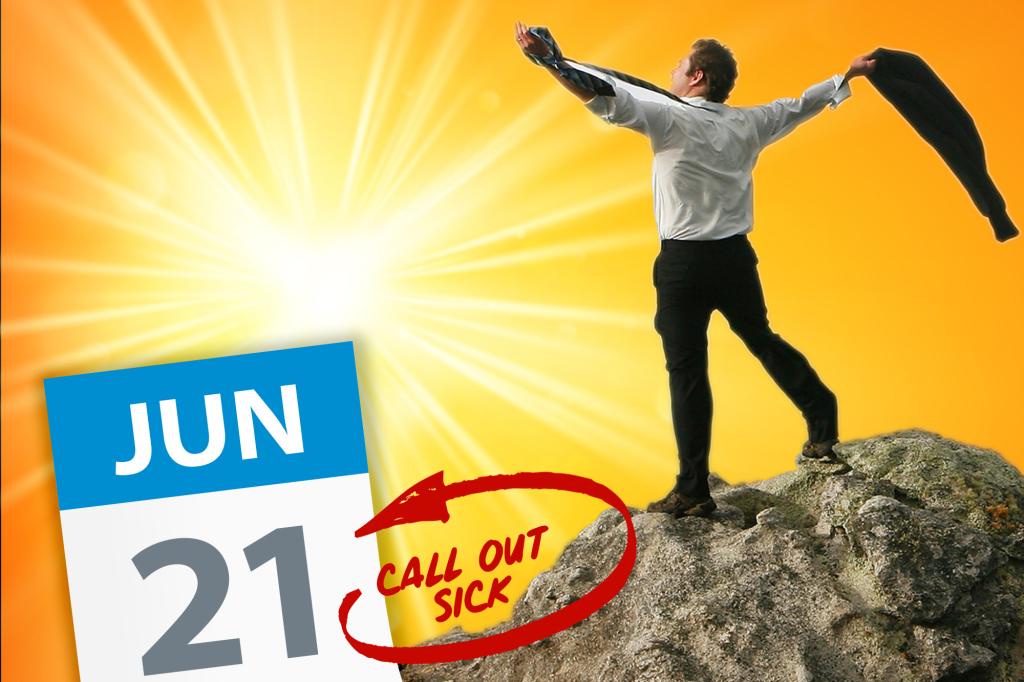 Think the summer solstice is just another day? Not for these sneaky sun-worshippers.

People are taking off work in the days around the transition from spring to summer, which officially takes place this year on Tuesday, June 21, at 5:13 a.m. Still struggling with the post-pandemic lockdown return to office, they’re trying to maximize their daylight hours away from their desks. (In the Northern Hemisphere, the summer solstice is the longest day of the year.)

It’s all in the spirit of what Icelandic people call sólarfrí or a “sun holiday.” The idea is to celebrate nice weather by kicking off work and making plans to soak in the sunshine. In fact, Reyka Vodka, an Icelandic spirit, is giving away $100 to 50 people in the United States who take off by way of an Instagram contest that ends June 20.

“A sólarfrí is what happens when it’s been real gloomy for weeks or even months, and then, all of a sudden, it’s 50 degrees and sunny out,” said Fridrik Ingimundarson, a freelance producer from Reykjavík who has been collaborating with Reyka in recent weeks to teach people about sun holidays.

“There is never an out-of-office response on email or answering machine. There is just no answer to anything,” he told The Post. “If you are trying to reach someone and can’t, then you just look out the window and go, ‘Oh, sólarfrí, got it’ and take off yourself.”

This week, Craig Fairley was inspired to take a sun holiday when he realized he had the option to take off for Juneteeth — and indulge in some solar power.

The 29-year-old document management processor for an insurance company in Birmingham, Alabama, said he has trouble concentrating on his job when the weather is nice.

“I hate being stuck at a computer when it’s hot,” he told The Post. “I’m always daydreaming about going for a hike or playing with my dog outside or throwing some seafood on the grill.”

And that’s exactly what he plans to do with his sun holiday. He’s going to lay in a hammock for hours on end, sipping a cocktail and reading “Medium Raw,” the Anthony Bourdain nonfiction book that’s been sitting unopened on his bookshelf. He’ll be firing up the grill to enjoy some Tomahawk steaks and asparagus with his cousin, who also intends to be out of the office.

“It’s going to be full leisure,” he said. “My only goal is to do nothing and get a bunch of sun.”

Nicole Cooke is also planning to call out for the summer solstice.

“I have been needing a day off, and what a better day to do it than the longest day of the year?” she told The Post.

The 59-year-old sports writer and social media trainer plans to spend the day in nature at her home outside Austin, Texas, watching the birds eat from her feeder and tending to the cacti in her garden. She said it was back in junior high that she started to appreciate the idea of making the most of good weather, when she had a teacher who held class outside on sunny days.

“I think that is when I started to fall in love with being outside. It’s very Zen,” she said.

She believes companies should take this approach, too, letting employees work from the outdoors in service of their mental health. (Some corporations are actually giving this strategy a shot, with Forbes reporting that Goldman Sachs is imposing mandatory vacation on workers to help them avoid burnout.)

“We all need to be enjoying the sun whenever possible, because it’s good for you,” she said. “We need to start considering wellness as a basic necessity instead of focusing on it only when it’s needed.”

For Jason Burtt, he’s taking his first solstice off this year in search of a spiritual experience.

The 46-year-old Verizon data center engineer has recently gotten into astrology and rock counting. “In the past few years, I’ve adopted what I would call a New Age thought process,” he said. He’s also started reading up on early civilizations, and their connection with nature.

Through his research, he’s come to believe that the summer solstice is a day for rebirth. “I see it as kind of an official checkpoint during the year,” said Burtt, who lives in Wadsworth, Ohio. “It’s a change of a season, and it’s a chance to take stock of myself.”

Thirty-one-year-old Heim, who owns a fashion trade show company, told The Post that she and husband Lane, 30, play hooky periodically to splash around in their pool.

“We really just roughhouse — that is the best word to describe it,” Heim said, adding that she and her husband moved south from Washington, DC, last February, specifically because they craved more sun. “We are essentially children. I try to jump on his back, and he tries to throw me off.”

Because she’s self-employed, she doesn’t have to justify the days off to anyone, but Lane, who works for the US Department of Veterans Affairs, isn’t quite so lucky.

“He usually says he has to take the dog to the vet,” she said.